Woman narrates how she was abducted by Kayihura’s former aide 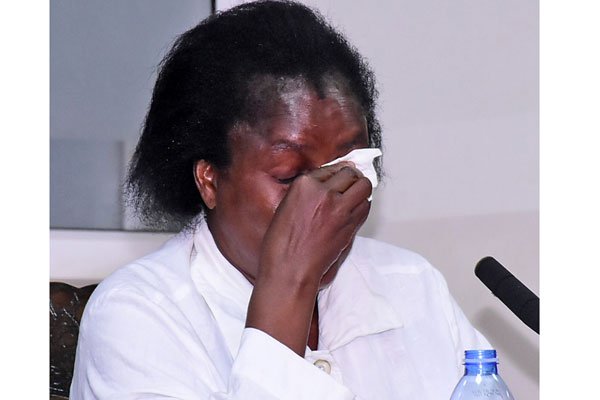 Ms. Mary Margaret Meri said  held kidnapped, hostage  several times and forced to sign transfer forms giving away her house to an advisor to the then Inspector General of Police Kale Kayihura.

While narrating her odeal,Meri said she was forced to write several letters giving away her house  to Kayihura’s technical advisor Ambrose Murunga(Kenyan), Lawyer Geoffrey Nangumya another she identified as Collins.

“The property was awarded to me as divorce settlement. I mortgaged the house for Shs250m with Housing Finance Bank, but I only took Shs40m because of the global economic crisis which pushed interest from 16 per cent to 33 percent, I decided to pay off the loan,” Ms Meri said.

After the global economic crisis hit in, Meri said  she decided to sell off her loan to a Chinese money lender Alexander from Huadang Gudong based at Kitgum House, who paid the remaining Shs.57m to Housing Finance Bank and took the title.

“After five months, I received a call from Murunga’s broker asking me to meet him at Quality Cuts Kabalagala over the property. When I arrived, he told me someone wanted to buy the property. I informed him my property was going for Shs700m but he insisted the property was Shs200m,” Ms. Meri narrated.

Along the journey, Meri said Murunga and Mugumya joined them and drove her to Martin road in Old Kampala where she realized they were armed having overheard them talking how Murunga working with state house. She said she was later driven to Kitgum house to collect the title and even denied the opportunity to consult her children.

Ms. Meri who is now homeless and resides at the Casuality section of Mulago hospital said she was driven back to Nagumya’s office where she was forced to sign an agreement dated 24th November 2013 selling her house at shs. 186m

“I was put under duress to sign. They later drove me to my property where I was given creased notes amounting to Shs10m, but on verification it was only Shs9m. My Lord, my house is worth one billion shillings, when I realized they were armed I decided to play it cool so that I can have a chance to challenge it in future,” Ms. Meri said