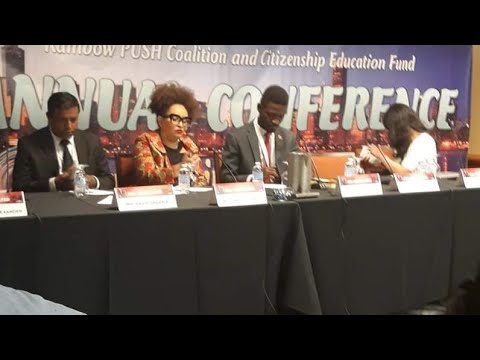 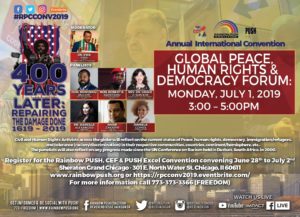 Hon. Robert Kyagulanyi Ssentamu attended the Rainbow PUSH Coalition Convention in the US. It was held on the theme “Global Peace, Human Rights and Democracy”

Bobi Wine gave an impassioned speech in which he called out the international community to “say what you mean and mean what you say” He feels that most dictators in Africa, and especially Museveni in particular, are propelled and kept in power by the West which ignores their civil and human rights violations.

Bobi Wine talked about Museveni’s systematic targeting of political opponents. He called on the participants to watch the documentary “A Brilliant Genocide” which highlights the genocide in Northern Uganda where President Museveni’s army systematically killed his opponents for more than 20 years.

Mr. Kyagulanyi also spoke about the young population of Africa and Uganda in particular, majority of which is under 35. He talked about the move by Museveni to restrict social media use through imposition of a repressive tax. This was meant to restrict the only reliable space for young people’s expression.

Mr. Kyagulanyi asked Western allies to act and support the movement of change in Uganda if they are indeed serious about protecting civil and human rights in the Great Lakes region.