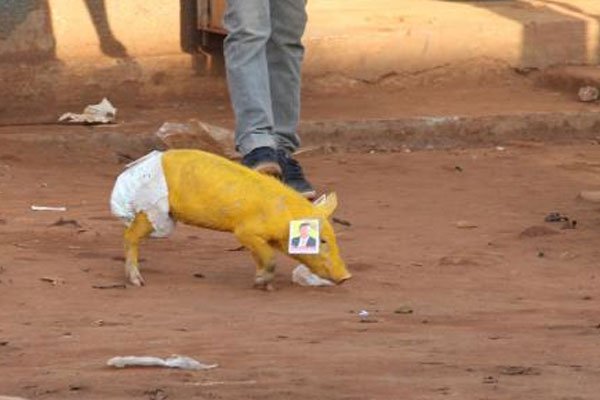 All is not well with our colleagues in the ruling government NRM camp. Today, a group of youth who claim to be supporters of the ruling National Resistance Movement (NRM) have dropped piglets in Jinja town to protest what they described as hypocrisy of party leaders.

The youth identified themselves as members of a pressure group known as Team No Sleep.

They are particularly angry with Jinja West MP, Mr. Moses Balyeku who they accuse for dividing the youth in Jinja district. They claim that ever since he lost the NRM District Chair seat in 2015, he has systematically sidelined its youth in his Busoga region engagement programs.

“Our district party chairman, Hon Igeme who is mandated with ensuring unity within the party is never available to unite warring factions which has given birth to more divisions amongst ourselves”

The five piglets which were painted yellow, the colour of the NRM party, were dropped on Obote Avenue.