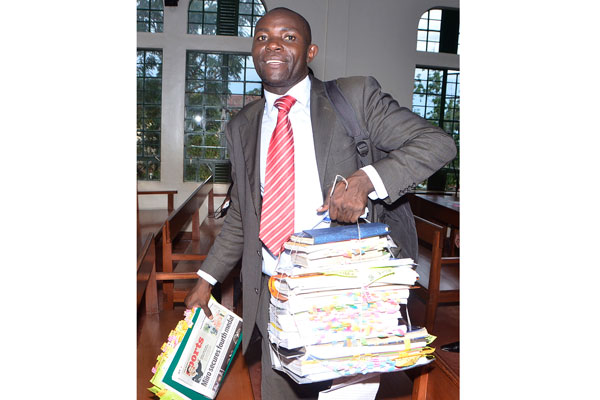 Justices of the Court of Appeal who include; Fredrick Egonda Ntende, Percy Tuhaise and Cheborion Barishaki have dismissed with costs an application in which a subject wanted to recover billions of shillings from the Kabaka of Buganda Ronald Muwenda Mutebi II as costs arising out of the notice of appeal which he (Kabaka) withdrew.

The justices agreed with the ruling of the deputy registrar of the High Court that Mabirizi’s application for costs has no basis in law. It was considered incompetent since it arose out of a case which was dismissed by the High Court Judge Henry Peter Adonyo.

Mr Male Mabirizi sued his king and filed for a bill of costs amounting to Shs10.9b which was awarded to him by Justice Patricia Basaza after staying the execution of her orders of availing him (Mr Mabirizi) with all the bank details of money collected from people living on the Kingdom land at the request of the Kabaka through his lawyers.

Last year Justice Adonyo dismissed Mr Mabirizi’s case against the Kabaka challenging the compulsory process of registering people living on the kingdom land, also known as the Kabaka’s land at a fee ranging from Shs100,000 and 600,000 depending on the location of the land.

“It is a well-known principle of law that if the suit is dismissed for illegality, the winning party is entitled to costs ultimately but the person who brought the suit illegally cannot take any benefits out of it, otherwise that would render the legal process a laughing stock,” court ruled.

Justice Adonyo in his ruling said he cannot deal with the matter which is already decided by a superior court (Court of Appeal).

The Judge noted that Mabirizi’s case was declared incompetent by the Court of Appeal justices lead by Justice Egonda Ntende.

In the ruling Justice Ntende said Mabirizi’s case against the Kabaka was not maintained in law and court cannot issue an order directing the Kabaka to disclose bank statements and other kingdom documents on the basis of a case which is not tenable in law.

On the other hand Mabirizi has been ordered to pay yet to be determined costs to Kabaka for wasting his time in prosecuting a case which is incomplete.