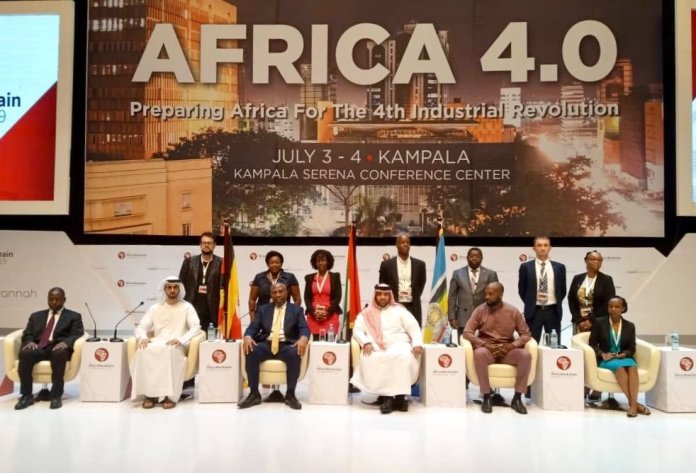 While speaking at the Africa 4.0 summit in Kampala,The minister of Finance for Planning David Bahati on Thursday asked the United Arab Emirates [UAE] Minister for Artificial Intelligence (AI) His Excellency Omar Sultan Al Olama to help Uganda design apps for monitoring elections that can help keep Museveni in power.

“…As we again receive HE President Museveni in 2021,” Bahati said suggesting Museveni would win again which sparked murmurs in the audience.

Bahati who had escorted HE Omar and Prime Minister Ruhakana Rugunda, said he was intrigued by the idea of a minister for AI.

“When I was speaking with H.E [Omar], he told me they have a ministry for Happiness and another one for Impossibilities,” revealed an elated Bahati.

He said Africa was unfortunate to be left out in the 1st, 2nd, and 3rd industrial revolutions.

“However, for the 4th Industrial Revolution, we have no excuse. Let us embrace it because now everyone can have access to the internet,” he noted.

In his turn, His Excellency Omar said technology is the future noting that “it used to take 6mins to diagnose TB in the UAE. Now with AI it takes seconds….”

Through an integrated vision, the UAE has been able to transform its growth by leapfrogging its development with emerging technologies, he noted.

He said the UAE has moved from a paper based government to a digital government and that plans are underway to fully evolve governance processes with artificial intelligence.

“We can deploy emerging technologies from the UAE to Africa so we can share benefits. Mutual collaboration will be key for sharing solutions that have been tried & tested in sectors like trade.”