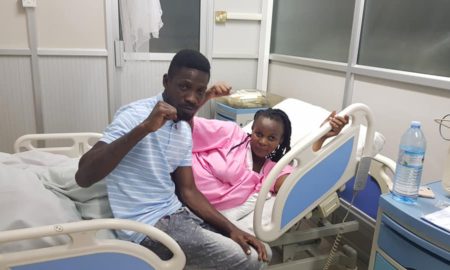 Nalongo Nana Mwafrika Mbarikiwa,  who has lived all  her life defending human rights, hates injustice to the core and  loves to speak for those who have no one to speak for them.

In April this year when Bobi wine was violently arrested by the Police, Nana refused to keep quiet even when she was seven and half months pregnant, she decided to visit the police headquarters in Naguru to request a meeting with the IGP or his deputy and protest against the blatant violation of the rights of Ugandans.

On approaching the gate to the police headquarters, dozens of police officers intercepted her and blocked her from accessing the public office.

According to her, the moment she mentioned the name ‘Kyagulanyi’ it was as if she had stirred a swarm of angry bees! They quickly pounced on her, pepper-sprayed inside her car and manhandled her in all manner of ways.

She says that in trying to forcefully pull her out of her car, the officers who we pay to protect us, undressed her and stepped on her heavy belly as they dragged her out of the vehicle. Sadly, they seemed to enjoy what they were doing.

When one of them protested against the manner in which a heavily pregnant woman was being treated, another responded by saying they would help her deliver her baby there and then! She says that a female police officer put her hands between her thighs and squeezed her groin as if in vengeance.

Her pleas fell on deaf ears! Once she was out of the car, she was left to fall down with a thud! She would soon become unconscious and spend lots of time in hospital where several activists visited her.

Sadly, as a result of her injuries, Nana had to give birth prematurely to a bouncing Baby boy before her uterus could be removed in order to save her life. While at the hospital, the state ordered that she is subjected to drug tests apparently just because she has had to stand up against injustices time and again.

However, Nalongo is unfazed, her resolve to fight impunity and injustice has not diminished. She knows that this is part of the price those who fight against dictators have to pay.

But like Dr. Stella Nyanzi, she deems it worthy to suffer alongside the oppressed people of God than live a fleeting life of pleasure when everyone else is not free.