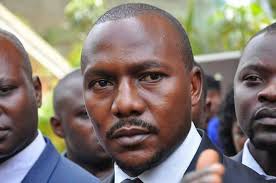 Former Kyadondo East Legislator, Apollo Kantinti has been sent to Luzira for another  six months  for failure to pay Shs.108 million as costs for losing an appeal in an election petition.

After the high court nullified Kantinti’s election as the Kyadondo East Legislator, Kantinti appealed against the decision howevr the Court of Appeal maintained the lower Court’s decision to have a fresh election before ordering him to pay a sum of 107 million as costs incurred by Nrm’s Sitenda Ssebalu

On June 11, 2019, the Court of Appeal issued a warrant of arrest against Kantinti for failure to pay the money but he was last week arrested over another unpaid loan.

Despite having been arrested and sentenced to 6 months in Luzira after defaulting a loan worth 300m  from Standard Chartered bank, on Monday, the same court sent him to Luzira prison for failure to pay the amount he owes Sitenda.

“This is to authorize and require you to receive the said Hon.Appolo Kantinti into your custody for a period of not exceeding six months and court hereby affixes a sum of shillings 3000 per diem payable weekly,” reads in part the warrant of committal by the Court of Appeal dated July 8,2019.

Kantinti was last week sent to Luzira to spend six months for defaulting on a shs300 million Standard Chartered Bank loan he acquired in June 2016 and was to pay in 50 installments over three years with an interest rate of 25%. His second sentence comes days after Hon. Robert Kyagulanyi Ssentamu aka Bobi wine had instructed his team to organize a fundraising drive that could help rescue Kantinti.