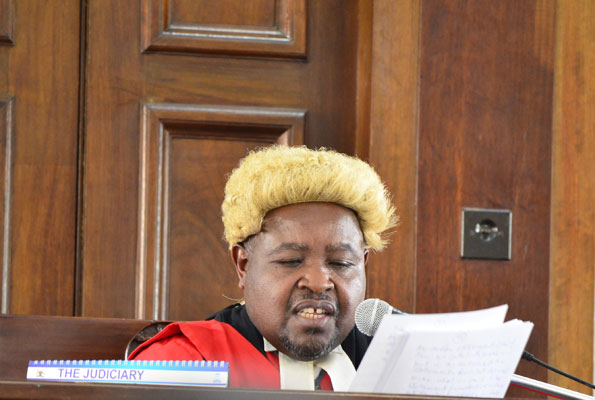 The Chief Justice Bart Katureebe has written to Justice Joseph Murangira requesting him to defend himself on allegations of allowing to bundle up a case in which 3000 people were evicted from five villages in Mubende district.

Last week, a group of residents from Mubende through their Lawyers  petitioned the Chief justice complaining over the manner in which Murangira handled the land matter that led to their eviction.

Murangira’s problems stem from a case in which Police led by the Mubende DPC Martin Okoyo following a court order evicted five villages leaving over 3000 people homeless under the orders of a one George Kaweesi who claims ownership over the contested land.

However, in a letter dated July 8, 2019, the Katureebe acknowledged receipt of the complaint before asking the judge to defend himself on the matter.

“I have received the attached complaint in which adverse comments or allegations have been made against you. Please give me your responses on the allegations against you so as to enable me respond to the complaints,” Katurebe wrote in the letter to Murangira, also copied to the Principal Judge, the Secretary Judicial Service Commission, the Mubende High Court Registrar and lawyers from Kiiza and Mugisha Advocates.

Justice Murangira was transferred from Kampala to Mubende High Court in 2017.

In October 2018, the chairperson of the Commission of Inquiry into Land matters, Justice Catherine Bamugemereire said many Ugandans had been rendered homeless due to rampant illegal land evictions aided by judicial officers.