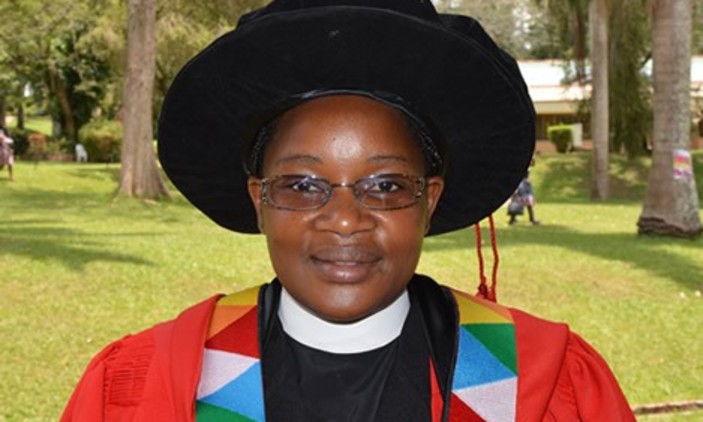 The Church of Uganda yesterday made history when they installed the first ever female Provost in the Church’s history in Uganda. Rev. Canon Dr. Rebecca Margaret Nyegenye was yesterday installed as Provost of All Saints Cathedral, Nakasero by Archbishop  Stanley Ntagali.

Rev. Canon Dr. Rebecca Margaret Nyegenye was installed together with her assistant, Rev. Captain David Serunjogi during the mid-week service at 5pm. They will now lead the Cathedral, which is also the seat of the Archbishop of the Church of Uganda.

The Provost is the Parish Priest and is also the Chief Executive Officer of the Cathedral He/She is charged with providing overall leadership to the Cathedral ministry in articulating and implementing the Vision, Mission, Objectives and entire operations of the Church while maintaining the dignity, heritage, and values of the Anglican Church of Uganda.

Rev. Canon Dr. Rebecca Margret Nyegenye was born in Busia to the late Rev. James Efumbi and Janet Efumbi. She holds a Doctor of Philosophy (PhD) from University of KwaZulu-Natal, Master of Arts in Theology from Trinity Episcopal School for Ministry USA, Bachelor of Divinity of Uganda Christian University, and a Certificate in Theology from Bishop Usher Wilson Theological College Buwalasi. She is married to Mr. Wilson Nyegenye, the National Equipment and Supply Chain Coordinator-National Laboratory Services in the Ministry of Health.

She was ordained in 1997 and priested in 2000 in Bukedi Diocese. Dr. Nyegenye first worked at St. John’s CoU in Busia as Assistant Vicar and Acting Vicar between 1996 and 1998. She later moved to Uganda Christian University as the Chaplain’s Assistant in 2002. In 2004, she was promoted to Assistant Chaplain till September 3, 2012 when she was appointed Chaplain.