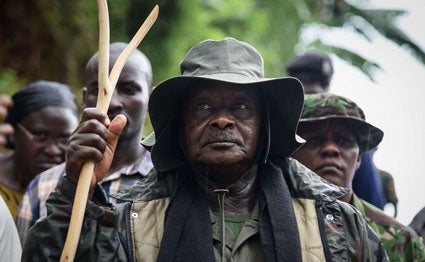 President Yoweri Musseveni has used his on going campaign in Buganda to launch an attack on the Katikkiro of Buganda Kingdom, Charles Peter Mayiga.

Museveni while addressing a rally in Ngoma, Nakaseke district today, Thursday, called Mayiga a liar and ordered him to stop speaking nonsense. Museveni was referring to the Katikkiro’s persistent criticism of the Coffee bill, that among others seeks to regulate coffee farming. The Katikkiro has ridiculed the government’s plan to register coffee farmers and give them licences.

Museveni, in response, told Mayiga to stop lying to the people about the pending Coffee Bill. He said that he has been hearing him telling lies and he has already sent someone to tell him to stop this nonsense.

“This Katikkiro (of Buganda) was lying; he should stop lying. There is no license for coffee farmers but the Bill requires only registering of the farmers for record purposes and to ease exportation,” an angry Museveni said.

The president’s remarks are bound not to go down well with Mayiga who is known not to take prisoners. It also remains to be seen whether this attack on the Katikkiro of Buganda won’t sour the fragile relationship between Buganda Kingdom and the State.