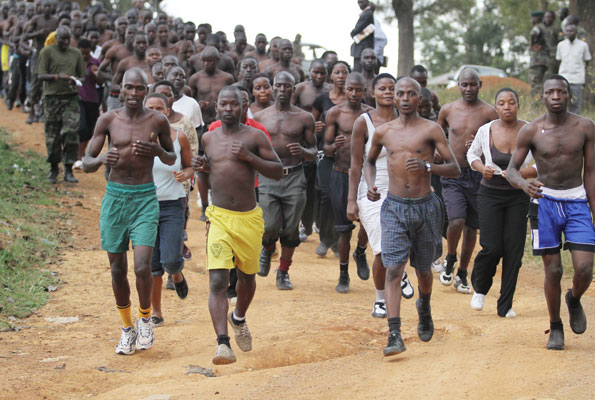 In the first part of this series, we told you the genesis of the LDUs in Uganda and how they have become a key component of the NRM electioneering scheme.In this part, we talk about the flawed procedure and basis of LDU recruitment. Read on.

We are introduced to a colleague in the police force who declines to be on record for fear of being labelled a mole as this would strip his job. For that case we shall call him Constable Okoth since he hails from the Northern part of the country. He is a low ranking police officer on the rank of lance corporal despite serving the forces for over twenty years. He reveals that he joined in the late 90’s towards the 2001 general elections.

Okoth tells us that he overheard his top bosses buried in a deep conversation where they revealed that they had received orders from their seniors to assist in the recruitment of the LDU troops who would replace aging police officers perhaps of Okoth’s kind. His seniors further shared how they were tasked to only consider Senior Four leavers of a humble background as these would be compliant with whatever orders they would receive in the ‘chaotic’ election times.

Before his gruesome murder, ASP Muhammad Kirumira (RIP) had wanted to expose some of the dirty secrets within the forces and these included the mode of recruitment which largely targeted people of criminal record. Former IGP, Kale Kayihura was a good subscriber to the “send a thief to catch a thief” phrase which manifests why he spat authority on criminals like Kitatta. Ironically, this same school of though still reflects in the LDU recruitment process.

In Rubaga division for instance, a renowned Nakulabye notorious thief has been recruited into the LDU. For a fact, how would such an element keep law and order if he himself is not clean at heart. The general public is already under concession that the elevating criminality is pursued by the LDU associates. One of the Nansana shootings victim told Ekyooto that the guns used in the robbery was a brand new AK-47 model similar to those issued out to the LDU.

The training sessions are supervised by top UPDF officers. Musa, an LDU recruit from Kawempe told us that while they are at training, cadres in the NRM party visit their trainers and they hold closed door meetings discussing what only themselves know best. In our first episode, we related to the formation of the Crime Preventers force which then targeted “Go Forward” and FDC supporters. This time round, the LDU is clearly created to counteract People Power and silence its supporters. The obvious reason why the deployment is still urban based is due to the fact that it is where Robert Kyagulanyi’s main centre of power is stemed.

In our investigations, we noted that the recruitment process starts from the villages where RDCs and DISOs spot their own colleagues believed to bed with NRM. They target S.4 leavers basing on the assumption that they can outreason them, control them and most importantly these are subjective and can’t question authority and command. An impoverished background is also another consideration given that is starved on a meal a day, this person can deliver the ‘best’ results while dealing with the masses on the streets in case of a protest.

One of the recruits told us most of his friends possess a fearless temper and can do anything because they have nothing left to lose. On record, the LDU was seen defying police orders to brutalise a suspect in Mbarara, even recently in Kampala, a night club DJ was shot dead by an LDU officer. These LDU troops are fed on the assumption that all youths, night club lovers inclusive are People Power associates and enemies of the state who should be dealt with. We have engaged dwellers of urban parts of this country where LDU deployments are a decorum of the main streets.

The public has stories to tell and we shall be unveiling these narratives in our next episode.