Bobi Wine will defeat Museveni and the army will salute Him 10 reasons why . 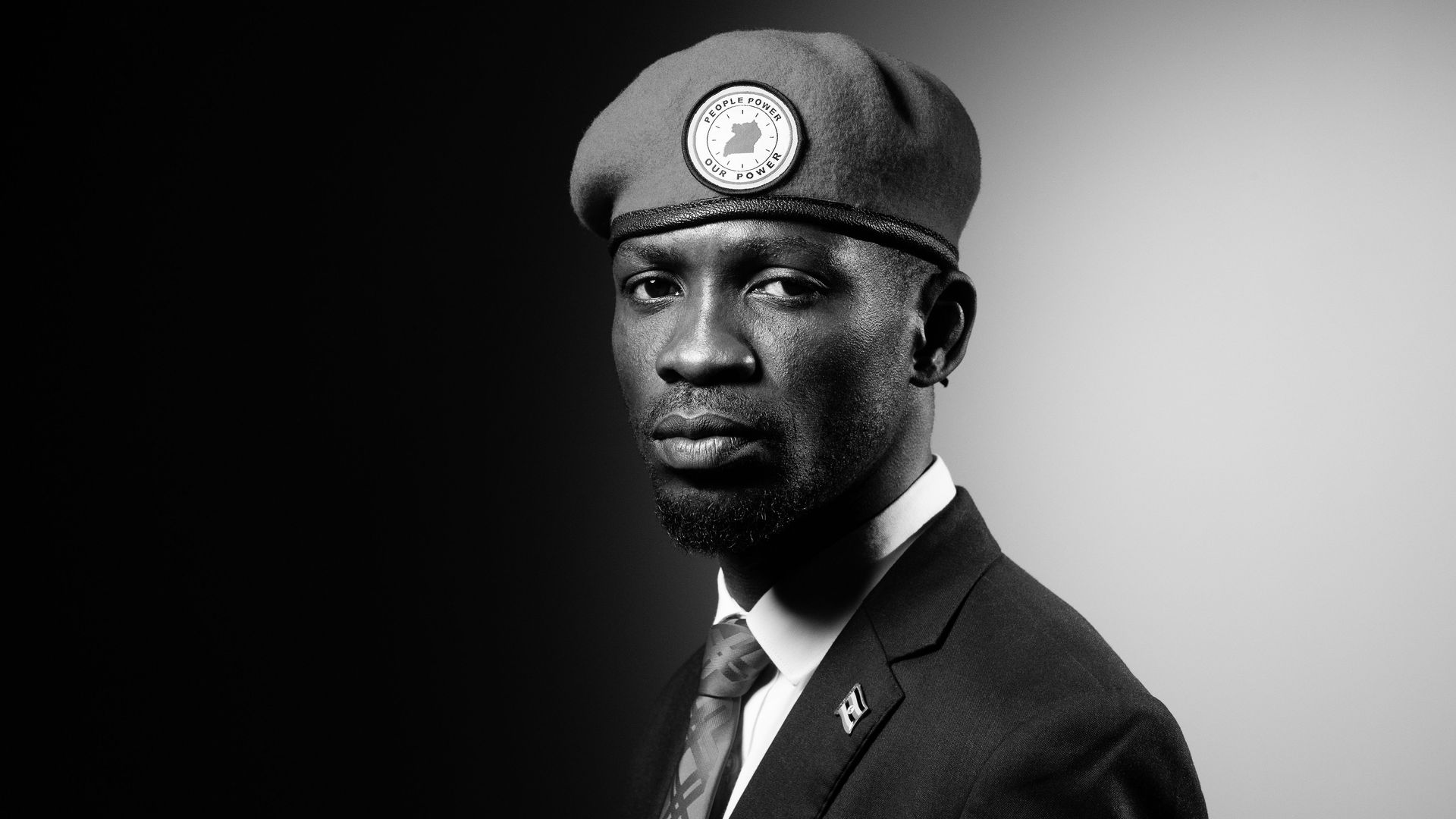 I have heard very loathsome, contemptible, despicable, detestable, abhorrent, treasonous, and repugnant statements to even a shabby democracy of our caliber.

The talk was originally that Bobi Wine cannot win Museveni, but has now changed to one insinuating that the army will not allow Bobi Wine to be President – this is after it has become clearer that the young man has actually martialed adequate capacities to defeat the old man.

I call it idle and speculative because it’s not backed by any provable evidence. It’s meant only to intimidate the people, make them powerless and discourage them from perusing self determination path they are now.

Below are 10 reasons why #HEBobi Wine will defeat Museveni and the army will have no choice but to salute him as President;

International wind against the Museveni regime.

For all these years, Museveni has been enjoying support and good will from foreign governments more than any Ugandan government in history in form of loans, grants and other form of donations. Foreign debts have been forgiven and more borrowed to him.

His willingness to fight wars in the interest of these imperialist, in Sudan, he was able to contain Bashir and when it became clear they would not overthrow Bashir, a new plan was hatched to divide African vast nation.

In the Congo, Mubutu was overthrown to create a chaotic environment where the world mafias could be able to loot the Africa’s richest nation.

In Somalia, he dared and succeed where the American literally ran away. These adventures and good rhetoric won him friends and good will which was instrumental in watering his patronage system which sustained his government.

However, since this relationship was based not on principle but interest, the interest of the imperialist has changed and all indications are that Mr. Museveni can no longer serve them.

They have now made up their minds to have Museveni out of power because his continuous stay is endangering these interests and must get out of power at the earliest available opportunity.

The Buganda Factor.
In all countries, the biggest tribes hold governments, the Kikuyu in Kenya, the Kyona in Zimbabwe, Zulu in South Africa, Dinka in South Sudan etc. In Uganda, in addition to numbers they are ordinarily the most educated, wealthiest, and geographically located at the centre of the country yet, behaving like a disadvantaged minority.

Lately however, indications are that they are realizing their advantage and wants. The emergence of Bobi Wine energizes their ambitions and capacity of #HEBobi Wine makes it a sure wine against a tired Museveni.

The Catholic Church accuses Mr. Museveni for instigating the emergency of a sect just like he has done in all other organized sections of our communities. Besides, the Catholic Church seems tired of being in the number two position yet they determine politics of this country.

The emergence of Bobi Wine gives them a confortable fulfillment of their ambitions and the Church or individuals within the Church are heavily working towards its achievement.

Regional Difference and Alliance.
For sometimes, there is feelings in the north, east and central Uganda that the national cake is not properly distributed. This is evidenced by illustrious number of people from Ankole and Kigezi holding the most influential positions in the country.

Somebody recently shocked me by giving numerical evidence that there is a tribe in this country who by any account are not among the top ten majority and yet they are the majority in the security forces, secretaries in statutory commissions, permanent secretaries, even in universities, they are more visible than the majority tribes.

This has caused discontent among people from other regions. Dr. Besigye being “nearly” same with Museveni, has been a good propaganda point. I remember how propagandist would smartly state that voting Besigye or Amama Mbabazi was just voting the other side of Mr. Museveni, after all they are same in many ways.

In fact, this country would never be the same if Museveni’s contender of Besigye caliber was from another region.

It’s this radical difference which Bobi presents that has caused a feeling of natural alliance of the three regions versus part of western Uganda. I say part because western Uganda is not homogenous.

The youth Factor.
The demographic numeracy favors #HEBobiWine. Out of about 20 million people expected to be voters in the next elections, over 16 million are below the age of 40 years.

About 7 million of these are going to vote for the first time (there is evidence that it’s a direct result of the #FunnaEndangaMuntu campaign led by Bobi himself).

Yet this is the most disgusted and frustrated age group with the Museveni regime. Their interests are not tied to history and this is precisely why Mr. Museveni’s long speeches in every public address make no sense and impact to them.

Bobi Wine on the other hand, in addition to speaking the real issues affecting these youth, is himself a personification of all these challenges. His achievement is a living testimony that one can be anything if s/he focused and worked towards it.

The numerical strength, the determination and need to change makes Bobi Wine almost impossible to beat.

The Bob Wine Brand.
The brand Bobi Wine is a selling brand with traceable known history. I am an eye witness to this. It’s this “Bobi brand that brought Muzanira, Mwiru, Basalirwa and Wadri to Parliament although other factors equally played a great role.

Bobi Wine’s engagements in these by elections made them not ordinary by-elections but changed the political chess game forcing, Mr. Museveni (mis)advisors to try to stop him in Arua probably by even murdering him.

This brand is now too contagious, infectious, very communicable, transmittable and spreadable across the geography, demography, social class and ethnic settings.

This is why I find it deceptive and an act of self-deceit that some people think by registering #PeoplePower, they will have killed the spirit of the struggle. This struggle is partly because of the #BobiWine brand and any organization under whose umbrella he emerges, will be as popular as Bobi Wine – the brand name; this brand is not stoppable in 2021.

The Hard Economic Situation.
The economic situation in the country is fast getting to unbearable conditions for the ordinary Ugandans; poverty is increasing, economic inequality is widening, unemployment rate is worsening yet everyday people are hearing how connected government officials are stealing trillion of shillings; Mr. Museveni’s cronies are living a lavish and extravagant lifestyles.

The situation in Uganda is only similar to that we all read in the pre French revolution; it’s the matter of the bread.

Suffice to remember, it’s the issue of the “bread” that caused to the Tunisian revolution, the Egyptian revolution, among others. Even the ongoing demonstration in the Sudan is a matter of the bread.

It’s the matter of the bread that is going to end the Museveni regime latest in 2021 election, and Bobi personifies the struggle.

The Increased Education And Enlightenment.
As rightly intended, education is to expose the recipients to ambitions and to the belief that they will get employed and material comforts. Once this expectation fails, knowledge, time and exposure in their hands is a lethal weapon especially to the intransigent, intractable and negligent governments.

The modern generation is the most educated generation ever existed, most capacitated and facilitated in terms of connection and ICT capabilities. Yet all this, government has shown no capability to solve or harness to their advantage.

Its this enleightened group that will end the Museveni regime latest in 2021.

The army comfort zone and other contradiction within the armed forces.

I have lately heard very treasonous and repugnant statements carefully constructed by the propagandist to the effect that the army will not hand over power to Bobi Wine and won’t allow him to be president.

The statement is not based on deep reflection on the pertaining national and international prevailing trends.

They want us to think that Uganda exists in isolation yet reality is to the contrary.

Do I wish to remind anybody that in 2016 elections, opposition won in all military and police barracks in the country, what does that say about how they feel?

Whereas it’s true some of the top commanders may not want to hand over power, the international trend doesn’t favor them. In fact we would rather have a situation where they openly intervene than pretending to be democratic when we are not.

Geo-political trends.
The geopolitical happening in the great lakes is making Mr. Museveni shabby and a political odd man out. The DRC election has in fact made Ugandan president the only “Mobutu” of the region who is out of fashion and trend.

The young generation of leaders in the great lakes region is increasingly becoming queasy with the Kampala regime. The regional interest can no longer be served by him and there is evidence to that effect.

They cannot afford to have unstable Uganda in the region yet Museveni is not any longer an asset but a liability to regional peace.

In summary, the contest between Museveni and Bobi Wine is one of two world tales; one representing the stressed and scaring history that characterizes our past and, the other representing the hope that hard work actually pays.

One thought on “Bobi Wine will defeat Museveni and the army will salute Him 10 reasons why .”