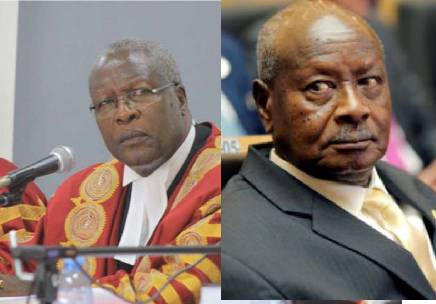 Ugandans should be paying attention to the a big dynamic ahead of the 2021 Presidential elections. We know for a fact that most election results have always been contested in the courts of Law. Understanding this, Museveni always wants to have a strong person presiding over his Judiciary in order to rubber stump his election victory in case of any contest that points at the multiple electoral irregularities that occur in Uganda.

Chief Justice Bart Katureebe has less than a year to retire from the helm of the Judiciary after a five-year service when he turns 70.

Article 143 (1) of the Constitution states that a person shall be qualified for appointment as Chief Justice if he/she has served as a justice of the Supreme Court of Uganda or of a court having similar jurisdiction or has practised as an advocate for not less than 20 years before a court having unlimited jurisdiction in civil and criminal matters.

The eligible candidate should also have at least 20 years of judicial experience. It is from such legal brains that the Judicial Service Commission (JSC) will recommend names to the President to choose Katureebe’s successor.

We cannot say with certainity who Museveni will choose. However, we know that the chosen candidate will have the heavy burden of delivering a Museveni victory in what is expected to be one of the hottest races that he has engaged in.