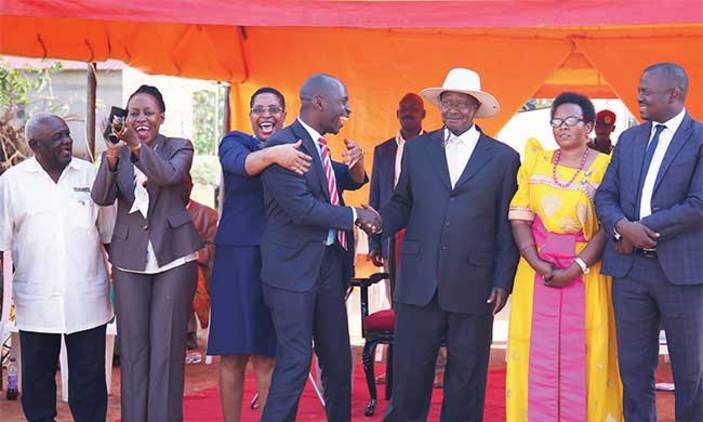 On Thursday, Member of  Parliament from Luweero asked MP James Kakooza to allow Nakaseke South Legislator Luttamaguzi Ssemakula greet the President and NRM supporters who had turned up for the President’s rally at Ngoma town.

Luttamaguzi Ssemakula is the current Member of Parliament for Nakaseke South Constituency representing the Democratic Party.

Member of Parliament Kakooza granted Luttamaguzi platform to speak to the NRM supporters who had gathered for President Museveni’s rally.

However Luttamaguzi told residents he would not criticize Museveni if he had fulfilled all his pledges to Nakaseke district before questioning Museveni why the Luweero-Butalangu-Ngoma road is not yet tarmacked attracting cheers from the residents.

Amidst cheers from the crowd, Bukoto Mid-west Member of Parliament tried  counteracting Lutamaguzi by explaining to the residents that the road was in budget but had not yet received immediate attention.

After making his concerns clear, the opposition Member of Parliament Lutamaguzi was granted the opportunity to meet with Museveni so he could front his concerns with a brown envelope in hand.

Luttamaguzi is likely to bounce back in Parliament after President endorsed the creation of Kapeeka-Semuto municipality from his constituency which means that Luttamaguzi and his main rival Nsereko Charles shall contest in different constituencies.