DP Bloc releases framework for new opposition coalition. Calls on other opposition forces to join them. 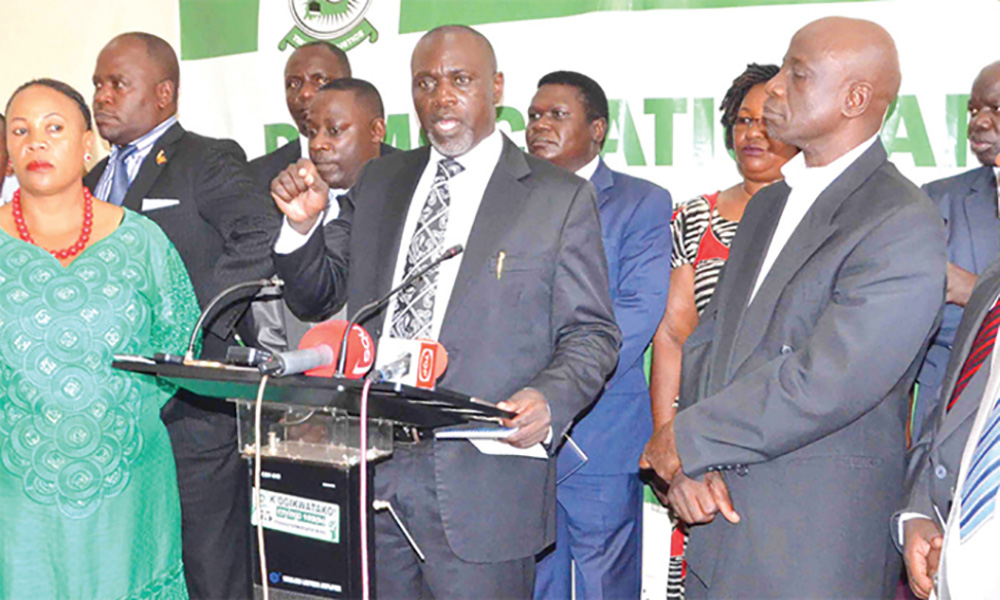 The Democratic Party  under its umbrella known as the DP Bloc, has called on opposition forces to form a coalition if they are to dislodge President Museveni in 2021. The DP bloc has decided to spearhead the coalition efforts and have named the coalition Special Purpose Vehicle, SPV.

In a press release signed by all DP Bloc principals , Norbert Mao, Micheal Mabikke, Dr Abedi Bwanika and Samuel Walter Lubega Mukaku, they said that they have over the past mnths been working on the framework for the SPV and that it was now ripe for revelation. Below, we reproduce the press release on the SPV.

Background
The unhealthy standoff between a repressive regime and a determined population committed to change has created an environment rife with tension and violence. The State, pushed to the wall by a collapsing economy, a divided polity, a military whose allegiance is to an individual despot and a shrinking democratic space, has become extremely intolerant and violent. Instead of engaging with the increasing voices of dissent, the Museveni regime has decided to intimidate the populace into silence over valid questions being raised about the doomed voyage our country is on.

Uganda’s biggest problem is dictatorship. All the other problems stem from this one major problem. Due to dictatorship, the government is not accountable. Public resources are abused with reckless abandon. Security forces are there for the protection of the regime instead of protecting the people. This toxic combination has turned Uganda into a Failing State.

In the circumstances, we have a responsibility to step forward with a liberation plan for our country. We need to rescue the Ugandan State from Musevenism. The plan is about dismantling the repressive and predatory military, political and economic machine which props up the regime and also dismantle the mindset of fear and hopelessness in the populace. This intense struggle by the Ugandan masses cannot fail if based on unity of the democracy seeking forces and a concrete program for transition into a Uganda beyond Museveni. The aim of our plan is to restore a renewed sense of ownership of the country to all citizens. The whole idea of Uganda needs to be renegotiated afresh. In short Uganda needs a New Consensus!

All this will not come without a struggle. President Museveni and his junta have no political will to democratize Uganda. Therefore the Democratic Party Bloc, aware that at a time of political crisis, reaching out across the political divide is not only a sign of political maturity but also a commitment to bring out the best in all of us, resolved to develop a framework for a Special Purpose Vehicle. The SPV will be open to all democracy seeking forces and its objective is meaningful Democratic reforms to ensure free and fair elections, an inclusive national dialogue and a new basis for political transition NOW. Elections have degenerated into a meaningless ritual and there’s no reason to pretend that 2021 will be any different unless the rules of engagement are overhauled.

The SPV Framework
For several months the Democratic Party has been working tirelessly to develop a comprehensive framework for a united front to present a viable alternative to the failing State presided over by the NRM. That work is now complete and we wish to announce that we are ready to share this framework with other democracy seeking forces for discussion. It is our expectation that we will agree on a Special Purpose Vehicle to lead the charge for democratic change in our country. Fortunately the DP Bloc has a liberation plan that can form the basis of a coalition for change.

Through the SPV, we believe that we can coalesce into a common front that transcends our narrow confines and unleash the power of the people. Under a common banner the contradictions within our ranks will be resolved in order to free us to resolve the primary contradiction between the Museveni regime and the Ugandan masses. Our unity will grow as we struggle for a common cause. Unity will be forged in the crucible of struggle. Our unity will also tap into the unprecedented surge in the political participation of young people.

We shall organize nonviolently inspite of the repressive and menacing state machinery. We shall stare fearlessly into the barrels of guns as we assert our humanity and citizenship. The writing is on the wall. We are seeing the beginning of the end of the Museveni regime.

So what are the next steps? From here the leadership of the DP Bloc will present this framework of the Special Purpose Vehicle to other top political leaders from other formations who are no doubt aware of our plan to launch the SPV. In addition we will present a detailed Discussion Paper on the things to take into account as we craft a formidable alternative to a dying regime. Intense closed door consultations and discussions will follow to build harmony. It is our expectation that the SPV or a coalition of the willing shall be formally launched before October 2019 and at its helm will be N leadership to a country in crisis.