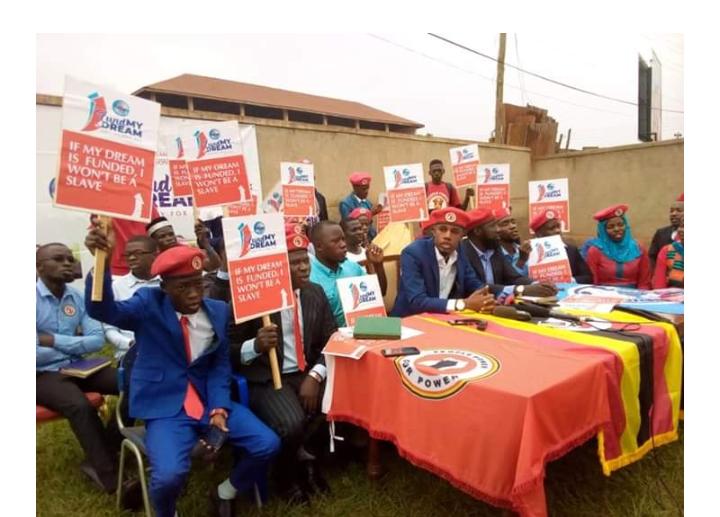 “Invest in youths instead of Catherine Kusasira and other sell outs”, JEEMA youths tell off Museveni

A section of disgruntled People Power youths from the JEEMA political party today held a presser at the Mengo based party headquarters. Led by the party spokesperson, Kyamundu Ssentongo, the youths hurled stern warnings at Mr. Museveni for misusing public funds on petty matters yet the economy is in a sorry state.

The youths discussed the elevating vice of human trafficking which heavily targets unemployed Ugandans who constitute the biggest faction of the population. They then launched the ‘Fund my Dream’ campaign through which they demanded government to prioritize the youths by making their dreams lively.

Majority of them were largely former enslavement victims that had earlier been stranded in the Middle East but got rescued after a humaniterian online outroar. Kemigisha Sharon, a local councillor in Katanga retorts of how she survived the wrath of an Arabic family that had enslaved her. She says, her fate was determined by her captors who denied her access to most of the life basics.

Another youth, Kyeyune Edward lashed out at government for channeling tax payers’ money into funding Museveni’s activities in the guise of ‘operation wealth creation’.

Uganda has been at the helm of human trafficking given the favourable government policies that grants labour export companies free unregulated operation in the country. Mr. Museveni simply seeks political relief by letting go of the unemployed youths to be enslaved in the Arab world. Recently, reports issued by the Mukono municipality legislator, Hon. Betty Nambooze implicated a wife to a police don who had held a young girl’s freedom at a grip. The police Don’s wife had even instructed the airport police to arrest tje girl on sight. That alone manifests the coordinated conspiracy between the captors and the regime.