I was tortured by ISO for opposing Museveni sole candidature, says NRM lady. 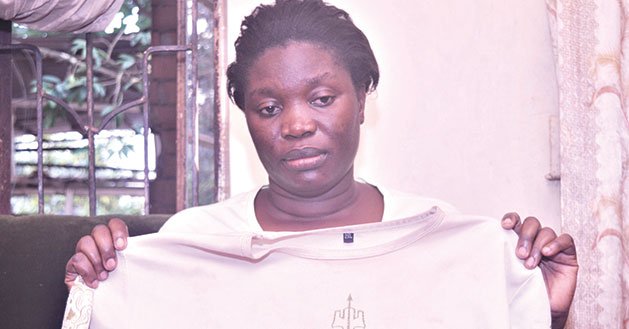 Ms Oprah Phoebe Kiddu, the chairperson of NRM for Justice, an NRM activist group opposed to President Museveni’s sole, candidature is recovering from excruciating wounds after she was abducted and tortured by unknown people. Her tormentors accused her of opposing the ruling party’s endorsement of President Museveni as sole candidate for the 2021 elections.

Phoebe was picked up from Balintuma Road near Ndejje University campus in Mengo by men and a woman driving a Mark II car. She was driven through Rubaga road and then Wakaligga before being blindfolded at Busega roundabout. It is reported that she was taken to the infamous ISO safe house in Kyengera where she was tortured to near death.

Phoebe went missing on June 24 and was on July 19 dumped on Makerere Road in Makubira Zone at the edge of Makerere University Primary School staff quarters. She was unconscious and was taken by good samaritans to Getwell General Clinic in Masanafu.

She, together with a group of other NRM members had planned a 10km marathon dubbed “Run from Captivity” up to the British High Commission in Kitante on June 24 to deliver a letter appealing to the UK to prevail on the NRM to stop the sole candidate bid. The run was foiled by police who deployed to break up the group.

Phoebe was heavily tortured while in captivity and a doctor’s report says that she had suffered multiple tissue injuries with blunt chest trauma and blunt abdominal trauma. She is reportedly in need of specialised treatment that can only be gotten from abroad.

The NRM perpetual Presidential candidate, Mr. Museveni has already kicked off early campaigns for the 2021 elections, disguised as wealth creation tours. The incumbent has also made sure that none of his opponents is given space to mobilise as he uses the police and army to break up any kind of opposition gathering.