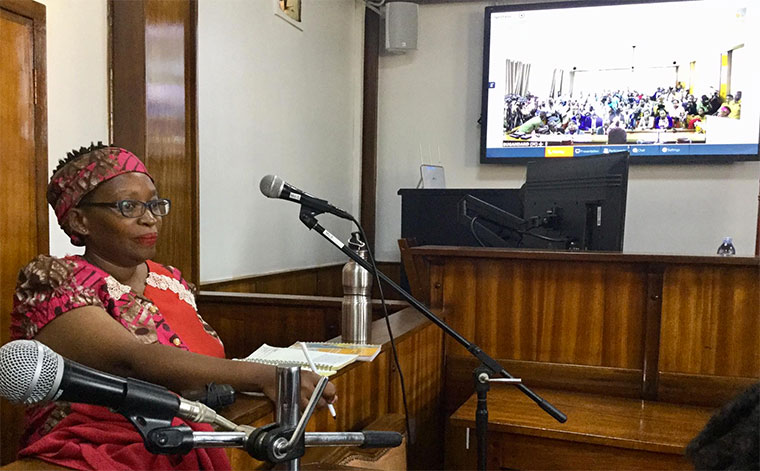 Robert Kyagulanyi Ssentamu aka Bobi wine took to Facebook to show his support towards Dr. Stella Nyanzi who has been battling cases on cyber harassment and offensive communication towards the person of the President in what is identified as the Vagina case.

Bobi wine wondered why the courts of Law do everything to protect the dictator and yet punishing the bold who speak against injustices created by the dictator.

In court Stella Nyanzi was convicted to cyber harassment by the Magistrate who found it convenient to condemn the learned fellow from using immoral words.

In the same courts corrupt men and women who support the regime have been protected, murderers shielded, land grabbers defended by the President himself but the court decided to castigate a mother who uses her poetry to speak truth for being immoral.

“The same courts which have protected the corrupt, shielded murderers and defended land grabbers are now castigating a poet for being immoral. You and me know very well that if Stella was President Museveni’s minister accused of receiving a bribe, she would be off the hook in no minute! If she was a high ranking police officer, accused of murdering or torturing a citizen, she would be out of cells, having a good time with her children tonight! She wouldn’t have spent even one day in jail!” said Bobi wine

He went ahead to question what being Immoral is or what is more immoral than gaging people who speak truth against a dictatorial regime.

“So what is more immoral? A woman who uses hard words to speak truth to power, or a minister who steals money meant for babies suffering from malaria? These things must be looked at in their full context. The argument of morality is only an excuse for persecuting this courageous woman who has dared speak out against an evil despot.” Said Bobi wine

However he gave Ugandans hope that  one day and not too far  all this will be history and we shall have a Uganda whose systems work.

“What gives us hope is that the forces of evil however dark never win in the end. God being our help, we shall certainly overcome.”

Furthermore he applauded Dr. Stella Nyanzi for the courage she has exhibited  in all the trials and tribulations the dictator has had to put her through.

Bobi wine declared that the courage of Dr. Nyanzi should speak to us boldly to not just sit down when our nation is going down the drain  but however stand in solidarity with her making sure  that each of us does what they can do best  to redeem the nation.

Stella Nyanzi was jailed in November 2018 after she wrote a Facebook post that annoyed the person of the president and charged with cyber harassment and offensive communication before she was later remanded to Luzira Maximum Security Prison.

As of Yesterday Nyanzi had been convicted with cyber harassment and acquitted of Offensive communication 9 months later.