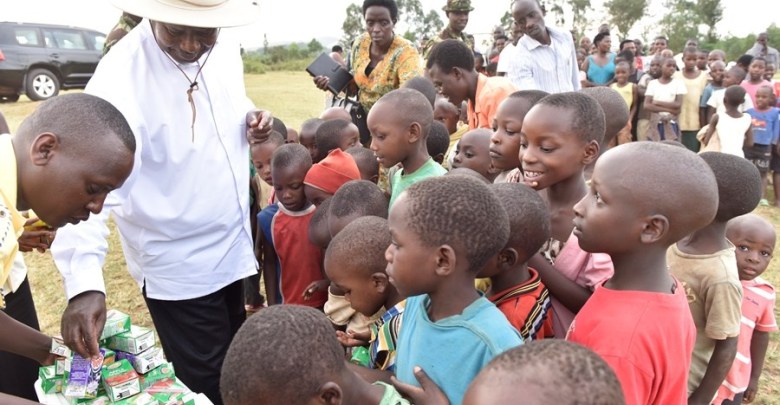 There is a video that is trending on social media that shows Yoweri Kaguta Museveni standing by the roadside and distributing biscuits to children by the roadside., picked by a basket by a female assistant. VIDEO

This video has cause public debate and has been used as an idiom for where Uganda has gotten as a country.

The Head of state is now the chief giver of “handouts” to poor Ugandans who are at his mercy. In the picture, Museveni stands on the tarmac holding an umbrella shielding him from the rain and well guarded by mean looking security personnel and driving in fancy cars.

On the other hand, children are standing on the muddy roadside and dressed shabbily. They stand in anticipation and praying that Museveni points at them to be given a biscuit (Yes, the Head of state handpicked the lucky kids to get a biscuit) And that is how far Uganda has sunk.

Each day, the gap between the poor and rich widens. There is that small class of Ugandans who stand on the tarmac like Museveni and a large majority of poor Ugandans on the muddy roadside praying for bread crumbs from those that stand high on the tarmac.

Even when Museveni wants to appear like a man of the people, his actions say otherwise. His only focus is on how to hoodwink poor Ugandans and peasants into voting for him in the next general election. While leaders like Bobi Wine eat with the common folk in the ghettos, Museveni cannot even dare step off the tarmac unto the muddy roadside to handout a biscuit to street children!

That is how far this country has sunk!