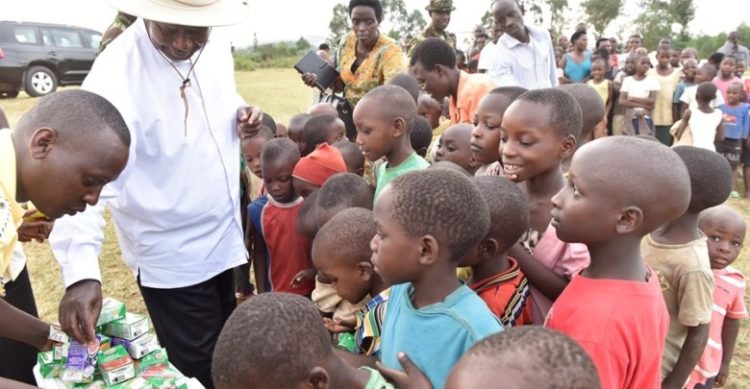 Over the weekend, a video emerged of the President of Uganda, Yoweri Museveni, handing out assorted biscuits and splash juice to children and mothers standing by the roadside in Bundibugyo. The items were being distributed by one of his aides and they were in a dustbin.

Our reporter sought out a comment from the president’s team as to why items were distributed from a dustbin. The source revealed a shocking secret that the items were actually expired!! The source intimated to us that the president usually stocks up on juice and biscuits to be consumed by his team as they make journeys across the country.

So, as he started out his wealth creation journeys in Western Uganda, one of the aides was sent to shop for the items. The aide didn’t check for expiry dates and purchased items from a supermarket in Mbarara with just a few days left to expire. On noticing this, the aides dumped the biscuits in the boot, waiting to dispose them off.

While touring Bundibugyo, the aides decided to trick the president into giving them out to the kids and bystanders to avoid questions from their bosses in case they discovered that they had purchased expired items and later threw them away.

“That would constitute wastage of state resources. Heads would have rolled. So, giving them out was the best move so as to cover up for the mistake. The poor villagers surely couldn’t find out that the items are expired because they are still get excited by biscuits” Our source said.

The president’s act surprised many and critics were quick to express how low our president had sunk to the extent of dishing out biscuits and juice from a dustbin on wealth creation tours. The irony. However the latest revelation explains this absurdity.