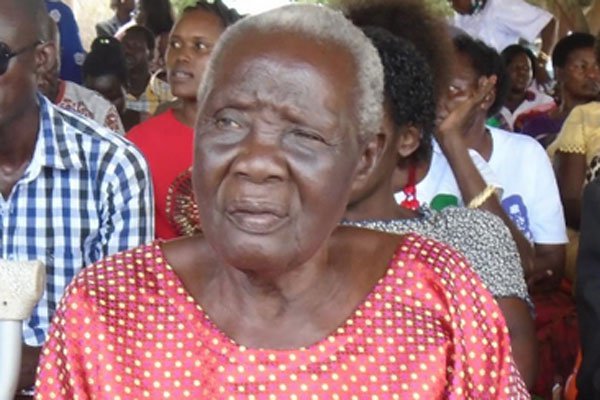 The wife of former Archbishop of the Church of Uganda Janani Luwum died yesterday aged 90.

Mary Luwum passed on at 3pm at the International Hospital Kampala (IHK), days after she was diagnosed with adrenal cancer (a rare cancer that begins in one or both of the small, adrenal glands located on top of kidneys).

Survived by seven children; four girls and three boys, one of her daughters said Mary Luwum had lived her life to the fullest.

“My mother was full of life. She was a strong woman…You know I lost my father at around 8 years and all I can remember is leaning on my mother and taking me through different stages of life. She struggled bringing up her kids,” Ms Phoebe said on Tuesday.

In a face book post, Bobi wine had this to say;

“We mourn the passing of our elder, Mama Mary Lawinyo Luwum, wife to late Archbishop Janani Luwum who was murdered in cold blood by the Idi Amin regime in 1977. Mama, is my hope that you are now joined together with your husband, a great and courageous man of God, in eternal glory, surrounded by the heavenly host. May your soul rest in peace.”

Bobi wine also reminded us that after murdering Archbishop Luwum, the government of the day came out to claim that he had died in a motor accident. They lied and concocted all sorts of evidence, but they did not go very far.

This came a few hours after Police claimed that People Power Movement supporter Zigy Wyne had suffered an accident that cut off his fingers, plucked out his eye and caused burns that look like they are from a flat iron which led to his death.

Archbishop Luwum was killed at Nakasero, Kampala by government soldiers during the reign of former President Idi Amin Dada on the February 16, 1977.