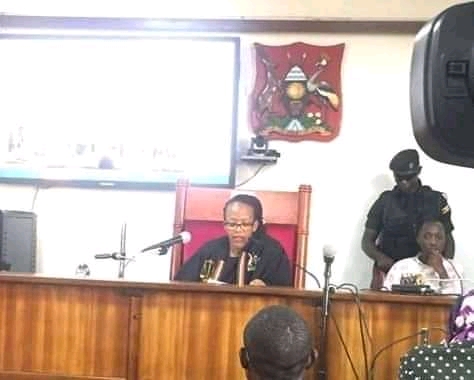 Our sources have confirmed that the trial magistrate in the concluded Dr. Stella Nyanzi ‘vagina’ case, Her worship, Gladys Kamasanyu has asked for leave to grant her some time away from work.

A defeated Kamasanyu is fleeing the country after concluding a high profile case in which she suffered one of the biggest embarrassments throughout her judicial career. On Friday, 2 when she was delivering her ruling in the ‘vagina case’ , a bottle flew out of the audience and hit directly at her right eye. This bottle is believed to have been thrown by one of the disgruntled supporters of the jailed academician who disagreed with the court ruling and sentence.

Trusted sources have informed Ekyooto that Kamasanyu was given shs 18 millions from the first family as a consignment appreciating her perseverance throughout the trial. Among other privileges, Kamasanyu has got from convicting Dr. Stella includes a free government sponsored flight to any country of her choice.

Gladys Kamasanyu is renowned for her bravery and open hate for human rights activists whom she convicts on first hearing. Prison warders attest that she is Luzira’s biggest contributor as most of the inmates on remand go through her courtroom. She recently convicted Brian Isiko, a YMCA student and sentenced him to two years for sending love sms texts to NRM MP, Sylvia Rwabwogo.