High profile cases that placed Kamasanyu in the spotlight 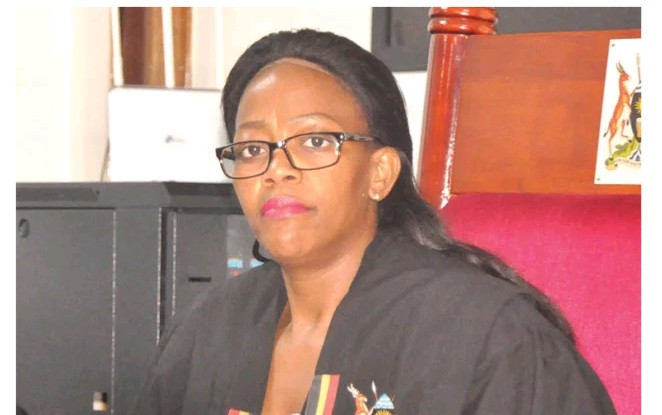 Before the year 2015, Buganda road magistrate Gladys Kamasanyu had not yet hit the public spotlight till she handled the case of former Old Kampala police station DPC, Joram Mwesigye.

Mwesigye was caught on camera manning journalists till he brutally hit Andrew Lwanga, a WBS journalist who remains crippled under support of walking clutches. Unlike other magistrates, Gladys Kamasanyu’s judgements always leave the aggrieved parties dissatisfied and disappointed. In fact, most of her rulings face revocation orders from the court of appeal. Ekyooto would love to sail you through most of the unfair sentences and rulings given by the 39 year old Makerere 2005 law class graduate magistrate;

In 2017, Kamasanyu handled a case that drew public attention and immense media spotlight. This was a criminal case against Joram Mwesigye, a former DPC of Old Kampala Police station. Joram faced assault charges pressed by former WBS TV journalist Andrew Lwanga whom he beat up during a protest at Mengo, Bakuli in Kampala. Kamasanyu who is always at crossroads with journalists tried to suspiciously kick them out of the case by the tactical snail paced way she handled this case. During the proceedings, a case slated for 9am would actually kick off at 4pm. An unapologetic Kamasanyu would not give any explanation or apology for the delays.
The final judgment in Lwanga’s case was set for March 10, 2017. Kamasanyu was supposed to deliver it by 9am that day. Journalists armed with their cameras hit the court room, filling it to capacity. Kamasanyu unbothered by the huge media presence handled other cases first. At around midday, she turned to the anxious Lwanga crowd and said; “You [journalists] are scaring my people.” That’s why I had to give this [Lwanga’s] judgment last.”
When she finally delivered the judgment late in the evening, Kamasanyu delivered a fatal blow to press freedom in Uganda. She convicted Mwesigye for assaulting Lwanga but let him walk off with a fine of just 6 million shillings. That couldn’t even cater for the Lwanga’s hefty hospital bills. The journalists in court booed Kamasanyu in protest and stormed out of court. She shot back; “Please respect me because I respect you.” “If you are not happy, then just go out, ok?” Then, Kamasanyu walked out of court unscathed.

BRIAN ISIKO
In 2018, Kamasanyu again handled a case which has since proved very hard for prosecution to re-litigate. Isiko, a student of YMCA Jinja branch was charged with cyber bullying and offensive communication under section 24 of the Computer Misuse Act.
Specifically, the student was accused of sending a barrage of love messages by telephone to Sylvia Rwabwogo, the Kabarole woman MP. Once the case was allocated to Kamasanyu, without delay, and on the first hearing, she convicted and sentenced the then 25-year -old to two years in jail, drawing a loud public outcry.
Kamasanyu claimed Isiko had conceded to committing the crime but this was later found inaccurate. According to the court record, Kamasanyu assumed Isiko had admitted guilt when he said; “Everything she [Rwabwogo] said is correct. I wanted her to become a personal friend. I ask for forgiveness. I also wanted her to give me ideas on how to run a poultry project. I didn’t have any bad intention.”
When Isiko appealed Kamasanyu’s judgment in the High Court citing a failure by the magistrate to comply with procedures laid out in law when an accused demands to change his or her plea, Justice Jane Frances Abodo agreed that Kamasanyu ought to have explained to the accused in his local language every detail of the charge and the ramifications of pleading guilty- something the magistrate hadn’t done.
“The abuse of procedure goes to the root of the case and it affects the accused’s [Isiko] right to a fair hearing,” Justice Abodo of the criminal division of the High court held while tearing into pieces Kamasanyu’s judgment and thereafter, she ordered a retrial but under a different magistrate.