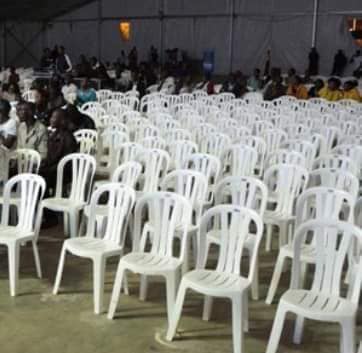 To prove a point that Museveni is now unpopular to the masses, the youths rejected the sacks of money in Jinja. Our reporter noted that the NRM officials dispatched to Jinja were giving out as much as shs 20,000 to the youths to lure them to board the three yellow buses but still the plan failed. To save their day from being wasted, the coordinators called the security heads in the UPDF, police and Prisons to attend the state celebrations. “There is no way we would attend such falsifications when we are suffering in poverty”, confessed Tenywa, a Boda Boda mechanic in Bugembe.

Today, the Ugandan youths wanted to send a clear message of their mistrust in the Museveni era. The Jinja event itself was thronged by middle aged people in their 50’s and 60’s

For long, Museveni and his illegitimate government have despised the role of youths in the country’s leadership. Even with ‘Santa Claus’ Museveni’s endless visits with sacks of billions to spend on the youths, the status quo has remained the same with no signs of advancement.