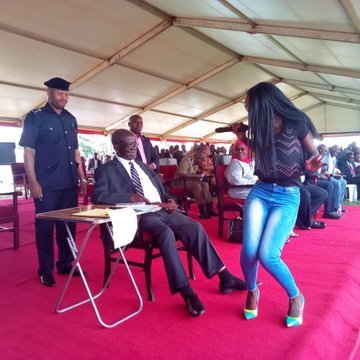 Ugandan Artiste Phina Mugerwa aka Masanyalaze on Monday roused loud cheers and endless ululations in Jinja district when she trapped the country’s Vice President in an electric dance leaving him unsettled.

This was during International Youth Day 2019 celebrations at St. Gonza Gonzaga Primary School in Jinja where the VP Edward Kiwanuka Ssekandi was officiating the function the theme: “Transforming education for responsible citizenship and employment creation.”

Ssekandi who represented President Museveni was treated to a dollop of entertainment and interactions regulated by a fine weather. Among such entertainment was an electric dance pulled by Phina locally nicknamed Shakira for her unparalleled dance moves that involve wiggling of the booty like it was detached from her main body.

Phina who was lisping one of her dancehall songs walked from the stage and danced all the way to the VIP tent where Ssekandi sat, legs astride.

On entry to the tent  Phina first entertained Speaker Rebecca Kadaga who honored her and leapt to her feet to wiggle a few “go down low” moves with the singing dancer leaving the youth ful crowd cheering.

When Phina was done with Kadaga, she was directed to VP Ssekandi who was seated beside the speaker and she unveiled her dance charms on him wiggling her ass as the VP studied it carefully.

As Phina continued going down low, up and down the artiste trapped the VP in a dance daze and he could not hesitate but pull out a brown envelope after he had been electrified.