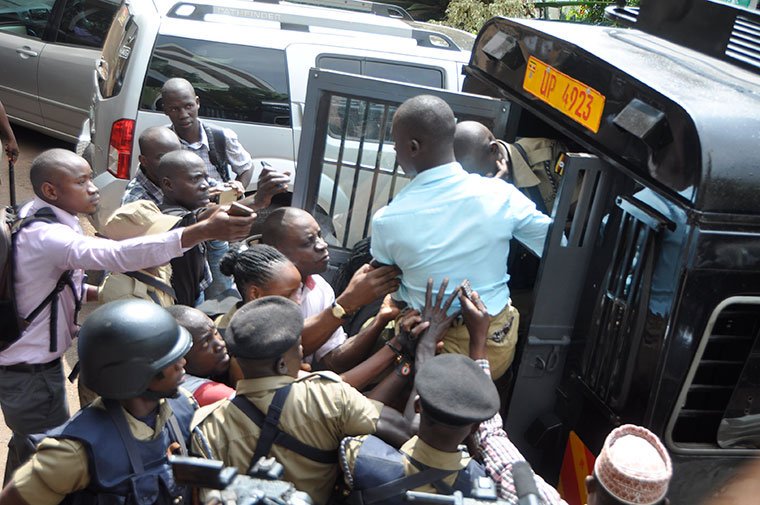 Police on Tuesday raided offices of the Uganda Young Democrats (UYD), and impounded T-shirts bearing words “Rest in Peace” in memory of Yasin Kawuma, the driver of Kyadondo East MP Robert Kyagulanyi, aka Bobi Wine, who was shot dead during the Arua by-election violence last year.

Speaking to journalists, the UYD administrator noted that Police had raided their offices  arresting four members who were  found sorting out the t-shirts adding that police impounded over 300 T-shirts which were meant to be distributed at the Dua prayers that had been organized in Lusanja at the deceased’s home.

“Members, who were arrested, include John Mary Sebuufu, Moses Kataabu, Fulugensio Musoke and Erisa Kaddu, who were preparing to go for the funeral prayers of the late Kawuma in Lusanja on Gayaza Road” he said.

Adding that Police had no explaination on why they were impounding Tshirts, Mr. ,Maddo said that Kawuma should be declared a hero because he died on duty while fighting for freedom.

“We urge Ugandans that the struggle is still going on and we are going to fight up to the last man and liberate this country,” he said.

However Patrick Onyango, the Kampala Metropolitan Spokesperson said that they had received intelligence reports that there had been printing of  some T-shirts  with inciting messages which prompted Police to raid and impound the contested t-shirts.

The arrested persons were taken for questioning at CPS in regards to verifying the intelligence information where Police said they would only interrogate them and then release them to go attend the prayers.

The arrests were made at a time the family of the late Kawuma and People Power movement had organized dua prayers to remember and celebrate the life of the deceased marking one year since he was shot dead.