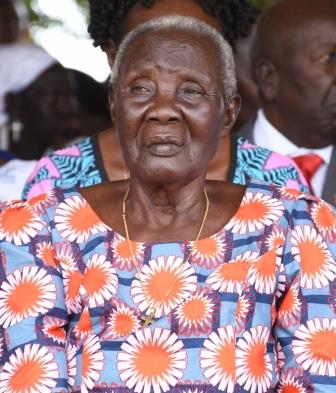 Parliament has paid tribute to Mary Luwum, the widow of former Archbishop of the Anglican Church Janan Luwum who died last week.

Prime Minister Dr Ruhakana Rugunda described Mary Luwum as a woman who stood by her husband during the trying moments of religious persecution under president Idi Amin.

Mary Luwum has been an inspirational figure in the Anglican church of Uganda.

She died Tuesday last week at the age of 93, 42 years after her husband’s death. Uganda’s black, red and yellow flag was draped over the white casket carrying the remains of Mary Luwum, who is survived by six children and grandchildren.

Luwum breathed her last at International Hospital Kampala (IHK), after what the Church of Uganda described as a “courageous battle with cancer of the gallbladder”.

Last week, Archbishop Stanley Ntagali said: “Mama Mary has been a faithful witness to her Lord and Saviour, Jesus Christ for many years. Like her husband, her testimony has inspired many and will live on. We commend her to her Lord and pray for their family and all who grieve her passing.”

In 2015, President Yoweri Kaguta Museveni declared February 16 to be a public holiday in memory of Archbishop Luwum’s martyrdom and his faithful and sacrificial service to the church and the country.