Museveni’s comrades turn into comics as old age hits up 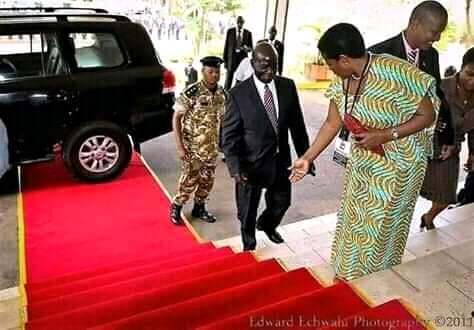 Overstaying in office has now turned Museveni’s minister into public laughing stock. From coming late for functions to driving in wrong lanes on public roads, Museveni and his Ministers are now giving Ugandans the funniest bit of their farewell.

In the mid-week anticipated Youth day celebrations in Jinja, Museveni had declared he would not step there hence dispatched his Vice president, Edward Kiwanuka Ssekandi to represent him. In a twist of events on that very day, Museveni changed his plans and forced himself into Jinja. That alone portrays him as a confused leader, a character we attribute to old age.

While at the Jinja celebrations, most of his Ministers were dozing off. Maj. Gen. Kahinda Otafiire was caught off guard in deep entrenchment into the slumber world. He dosed all the hell out of him and abruptly woke up to the ululations and cheers from other excited delegates that chased after Phiina Mugwerwa’s waist twists. The speaker of parliament Kadaga utilised this opportunity to try to check her stagnatedly positioned back. She danced alongside the youthful dancer till Ssekandi also jumped in to make a challenge.

Away from the Jinja youth day celebrations, Vice president, Edward Ssekandi was again invited to another function. This time round, it wasn’t officiating a toilet as usual but a classic function at Serena hotel in Kampala. The elderly 80 year old leader defied the polite gestures of the ushers to walk aloof from the red carpet. This left dozens of European delegates dismayed with many attributing all this to old age.