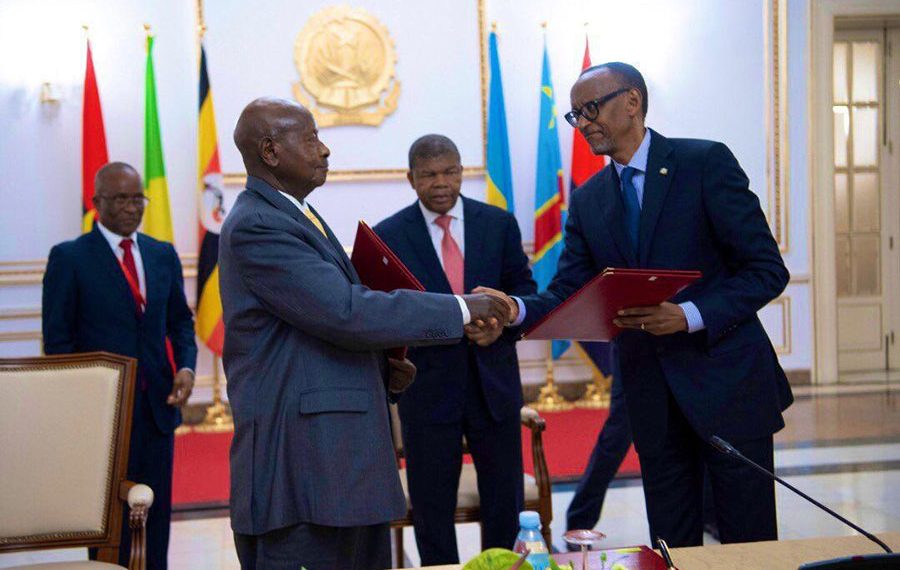 President Museveni and his Rwandan counterpart Paul Kagame have  signed a peace deal to end the bickering between the two close allies. Joao Lourenco on Wednesday in Luanda and also attended by the Congolese President Felix Tshisekedi.

In a meeting chaired by Angolan President

This was after a meeting chaired by Angolan President Joao Lourenco on Wednesday in Luanda and also attended by the Congolese President Felix Tshisekedi is where they agreed to end their war.

“Together with President Paul Kagame, we signed an agreement to improve the political and relations between our countries,” Museveni said.

The Rwandan President also confirmed the development while addressing a press briefing where he noted that he and his counter part Museveni had had the opportunity to broadly and extensively discuss the various issues that have causing their problems thus the memorandum of understanding reached today which stipulates the path to to follow as they continue to solve their differences.

President  Paul Kagame  insisted that the problems between the two countries only needed both countries to understand each other for things to run normally and also talked about the border closure with Ugandans as a problem that hindered trade in the region because both people and goods were not moving freely to carry out trade.

“When you have an open border, you have goods and people. When you create a problem for people to move across the border from one side to another, then you have closed the border to people and goods. We are going to address all these problems. By doing that indiscriminately, we will get where we want to be.”

The Rwandan President applauded the Congolese President and his counterpart from Angola for ensuring the meeting takes  place and promised they respect the communiqué as has been signed.

For the last few months, the relationship between Uganda and Rwanda have been at their lowest with both countries exchanging accusations against each other where Rwanda accused Uganda of harboring rebels plotting to destabilize their government but the Kampala establishment denied the same and accused Rwanda of sending spies to Kampala.

However Today, the 21st August 2019 an agreement has been reached between the two Presidents  with hope that business goes back to normal and borders are opened .