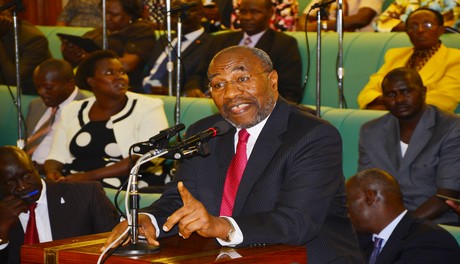 The week started on a high note with the Minister of Investment Evelyn Anite holding a press conference where she claimed that there is a plan being hatched by Mafias to end her life, because of her involvement in the ongoing Uganda Telecom Limited (UTL) saga.

Famously Known for Museveni’s Sole candidature campaign and arrogantly telling whoever wanted to sabotage the plans that she had the Majje to defend her, well when the Mafia turned their weapons against her she has now come back to the Public seeking for Sympathy.

During a Question and Answer session in Parliament yesterday, a session in which Prime Minister Ruhakana Rugunda responds to questions from members of parliament, Kasilo County MP Elijah Okupa asked the Prime Minister whether he does not preside over a mafia government following reports of murder attempts on Anite.

Rugunda noted that he has also heard about the mafia reports  in the media adding that Government has nothing to do with the Mafias.

The Prime Minister went ahead to call upon Ugandans to disregard claims by Minister Anite to the effect that there are mafias in government adding that Anite’s claims are baseless.

Rugunda’s dismissal of Anite’s claims comes a day after Speaker Rebecca Kadaga  invited Anite to her office to elaborate more on the Mafias that are running after her life.