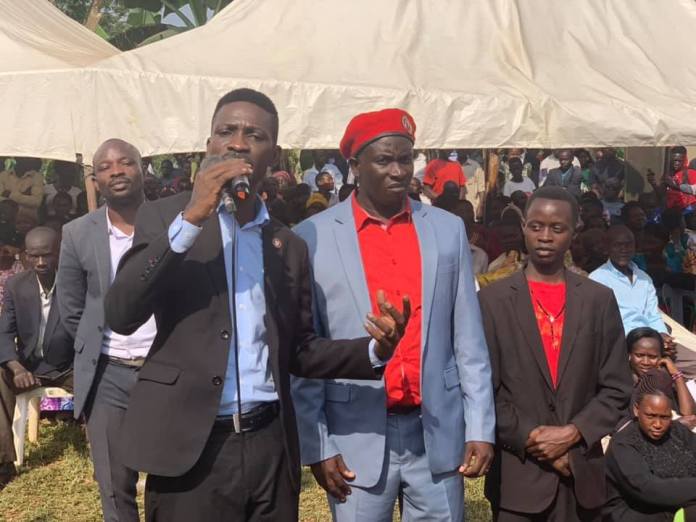 Kyadondo East Legislator Robert Kyagulanyi aka Bobi Wine has officially told the people of Gomba district where he hails from to prepare themselves for 2021 general elections.

The legislator who was on  Thursday visiting families of those who were killed during the August 2018 Arua fracas he apologized to the People of Gomba for having failed to secure time to see them yet Gomba is his fatherland.

In his apology Bobi wine revealed to his Gomba People that the delay to visit them for blessings was because Uganda Police has always blocked him from freely moving in his own country.

His statements were made during Maama Anna Sozi’s burial who was like a mother to Bobi wine before her demise.

“When my friend Kiku Noah lost his mother, Maama Anna Sozi (who treated me like her own son), I had to stand with the family.”

Even when police deployed along the main road to block him again and was beating up people who stood on the roadside to wave to his group Bobi wine revealed that he was determined and nothing was going to block him from attending Maama Anna’s burial.

“Meanwhile as all this was happening, I had been tipped off about the police plan so I decided to use some panya roads since Gomba is my home.”said Bobi wine

As the scuffle unfolded between Police and People Power supporters, One young man called Benedicto Kiwanuka who operates a barber shop in Kiriri was shot in the arm and was rushed to Gombe hospital.

Bobi Wine planted a tree in Lusenke- Bukalagi in memory of Vincent Serungaya who was shot dead by police during Arua protests and told  the people of Gomba that just like the rest of Uganda are yearning for change, they should prepare for the 2021 general elections with their National ID’s in check.

“I told them to get their national IDs and prepare for 2021.”noted Bobi wine

Pop star turned Politician recently bid farewell to the people of Kyadondo East who he has been representing in Parliament emphasizing that he will be challenging President Museveni come 2021 with hope that Museveni’s 33 year rule will be ended in a free and fair election.