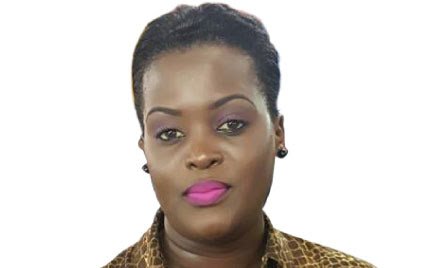 NBS has once again poached an NTV Uganda news anchor.

Luganda news anchors Hatma Nalugwa Sekaaya crossed from the Serena-based Television to NBS Television as the mass exodus of staff continues from one Tv to another.

Nalugwa defected to the Kamwokya based popular station according to the official Next media service communication. 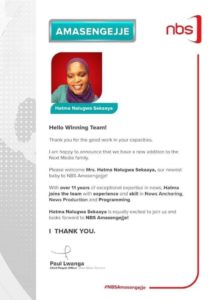 The celebrated Luganda news anchor and also host of Mwasuze mutya was yesterday officially unveiled to NBS staff as the company’s newest import.

“I am happy to announce that we have a new addition to the Next Media Family. Please welcome miss Hatima Nalugwa Sekaaya our newest baby to NBS Amasengejje,” reads a memo sent to NBS staff by Mr. Paul Lwanga Chief People Office at the Next Media Services.

With over 11 years of experience, Nalugwa joins Next media with a lot of expertise and skills in news anchoring, production and programming.

However over the last few months, NTV Uganda has continued to lose experienced staff   defecting other stations such as Head of News Maurice Mugisha who defected to the state-run Uganda Broadcasting Corporation (UBC) where he is now working as a deputy managing director.

Others include Joel Ssenyonyi who quit for People Power, Rachael Mwine and Carlton Scovia Nakamya.

Competition in the television industry has seen industry players jostling for the small number of creative journalists leading to continued Cross-Overs from here and there.