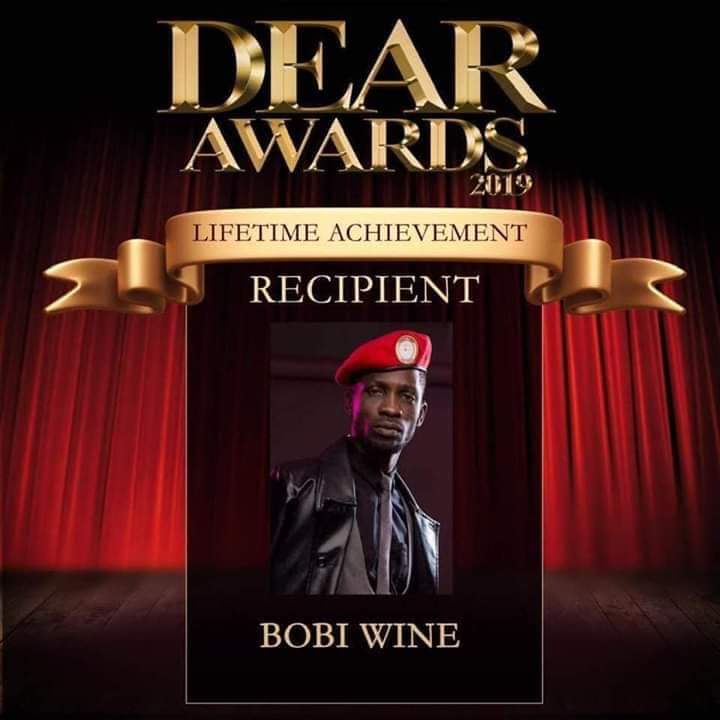 Kyadondo East MP and People Power leader, Robert Kyagulanyi aka Bobi Wine has yet again received an award in recognition for his efforts in fighting for human rights, democracy and good governance. Bobi Wine was awarded with the popular DEAR lifetime achievement award 2019 in the United States of America.

DEAR is a prestigious international organization that recognizes Africans in the diaspora and across the world that are making an impact in their chosen field while improving the lives of others. The event took places at the Marriott Hotel in Dallas, Texas on Saturday.

Bobi Wine was unable to attend the award ceremony due to other commitments back home in Uganda but was represented by the leader of the Women in People Power Flavia Kalule and group’s Coordinator for the United States of America Kharim Ntambi.

In a message, Bobi WIne thanked those who selected him for the award. He pledged to continue working even harder to fulfill his missio of liberating Uganda. He also dedicated the award to Ugandans living abroad saying that they were forced by poor conditions to leave Uganda and seek for greener pastures abroad.

This is the second international award that Bobi Wine is receiving in less than a year. He recently received the International Humanitarian Award in the United States of America.