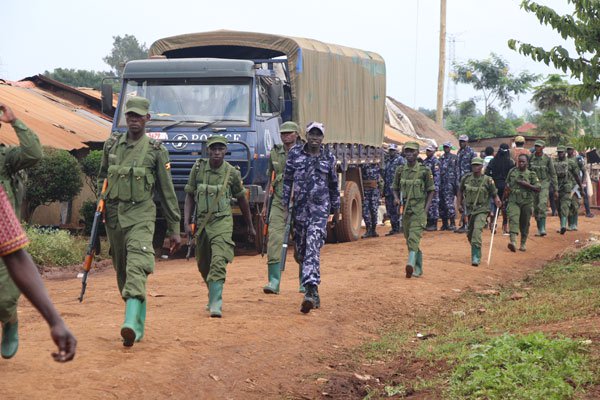 Police together with other security agencies   have deployed heavily at all major roads that lead to the Nile Discovery Beach in Njeru Municipality, where the annual Nyege Nyege festival kicks off.

The security deployment comes after a directive by Njeru Municipality Council compelling all residents to pay a 70% tax on each car parked at their premises.

It is clearly known that Residents of Lower Nava Village in the municipality always turn their compounds into parking yards for the four days the festival takes place and this is what compelled the municipal council to start taxing them off each car parked.

After discovering that resident make a lot of money off the revelers looking for space to park their cars, the municipality authorities took it upon themselves to gazette a private parking yard where all festival goers are supposed to park their vehicles at a fee.

Unfortunately this did not go well well with the residents who had planned to earn off their compounds as parking yards, they were prompted  to protest saying they are being denied a source of income that only comes once a year.

“The municipality is refusing us to make money. If they do not want us to earn a living, let them take Nyege Nyege festival away.” Ms Jude Monic said.

Ms. Sharotte Nakato a resident of Jinja  who owns a parking yard said the council is trying to benefit from their sweat revealing that they hire some of these places but were surprised to hear that the council wants them to remit 70% from each car that is parked.

“We hire these places to make money. But we are surprised that this time round the council wants to benefit from us by taking 70% from each car that is parked,” Ms Nakato said.

However a ccording to  the  municipality officials, they  have gazetted the municipality grounds for parking and  fees will vary from Shs10,000 to Shs50,000 depending on the  type of car.

Nyege Nyege festival is an annual event that runs for four days bringing in revelers from all over the world to come and celebrate life by partying day and night non stop.