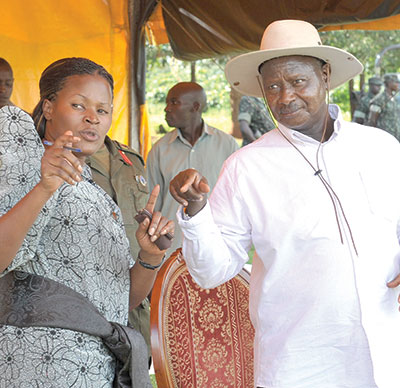 Today, the office of the Director of public prosecutions has relieved Minister, Aidah Nantaba of murder charges.

Mike Chibita’s office says there is no prima facie (minister has no case to answer) in Aidah Nantaba’s matter.

Apparently Aidah Nantaba is still out of the country in Canada for asylum since May this year. Close sources day the minister has been intentionally snubbing court and police summons under the president’s immunity as she claims she can only respond to the summons if Museveni asks her to do so.

In an August parliamentary session Rukunguri municipality MP, Hon. Roland Mugume was trashed by the prime minister when he tried to inquire on Nantaba’s whereabouts. “Hon. Nantaba us out of the country officially on duty and I dismiss information that the whistleblower has intimated. I authorized Nantaba on het request to attend official duties”, PM Rugunda said on record.

Minister Nantaba is battling murder charges of a one road user, Ronald Ssebulime alleged to have been gunned down on her orders as she suspected that the stranger intended to assassinate her on the Kayunga highway. It is claimed that Nantaba was returning from Kayunga where she had spent the weekend when a couple of masked men approached her vehicle and she speedily drove away in fear. A police vehicle was alerted and it reined in to ‘rescue’ the minister from danger. Ssebulime was handcuffed and shot dead as revealed by the police spokesperson, Fred Enanga, “It is true that the deceased was removed from the police pickup and instantly shot dead by our officer”. “We have arrested the car commander and 2 crew members for trying to conceal the facts of the events surrounding the killing of Ssebulime”, he added.

Further investigations revealed that Ronald Ssebulime was speeding to a local school to attend his child’s visitation day when he met his ill fate.

Nantaba’s ejection from the case leaves David Ssali, the policeman who shot Ssebulime as the sole person answerable for the murder charges. Ssali was remanded to Luzira prison after the Mukono Grade One magistrate, Mariam Luguya detected a prima facie in his matter.