Kamya boasts of delivering Kampala to Museveni through associations 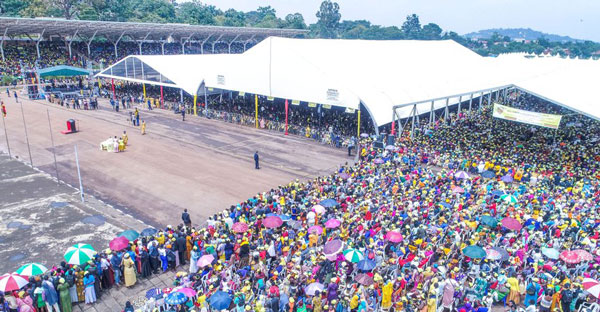 The minister for Kampala Beti Olive Namisango Kamya has told President Museveni that she has already delivered on her promise of turning Kampala into a support base for the National Resistance Movement (NRM) party.

Kamya declared that he had delivered Kampala to NRM during the the graduation of 8,480 girls and women with various vocational skills under the Presidential Initiative for Skilling the Girl-Child at an event held at Kololo Airstrip.

The skilling girls programme is Led bythe State house comptroller Lucy Nakyobe Mbonye where the girls and women are trained in vocational skills like tailoring, catering, weaving, carpet making, among others.

Kamya said that when  she pledged that she would deliver 85% People left at her as a joker adding that the fact that she has over 10.000 Youth is complete prrof that she has turned Kampala into an NRM support base.

“When I pledged three years ago that I will deliver 85 per cent of Kampala to you [Museveni], some people laughed at me. But isn’t this 85 per cent,” Kamya said, referring to the youths seated in giant tents.

When Museveni appointed Kamya a minister in 2016, she pledged that she would work tooth and nail to turn Kampala into a strong NRM support base for Museveni ahead of 2021. Traditionally Kampala votes against the incumbent and government officials have been offensive in the last three years to turn the city into the ruling party’s stronghold.

In her speech she said the President had managed to  everyone in Kampala and implored the graduands to vote for NRM and  peace in the next general elections in 2021 instead of joining the People Power band wagon.

As 2021 continues ticking closer, Museveni faces a challenge from Kyadondo East MP Robert Kyagulanyi and there is a feeling among the government and ruling party officials that many youths might be attracted to him. Kamya has led the president to various youth groups around the city splashing cash to them as a way of bribing them into voting NRM.