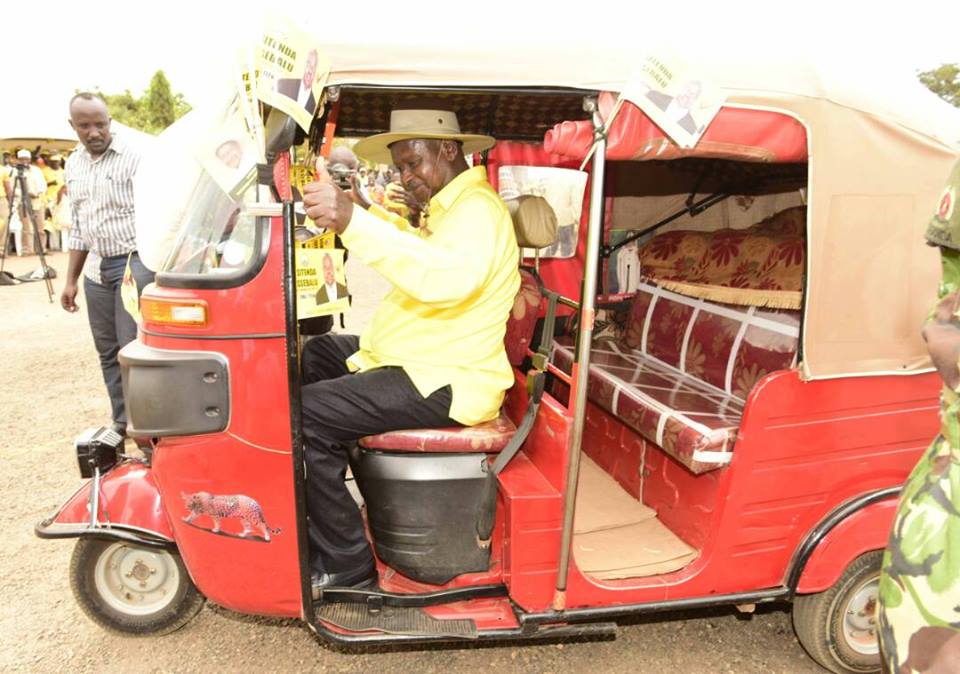 President Museveni is directly set to give funds under the presidential initiatitive rolled out at district level and among the recipients include Taxi operators, market vendors and boda boda operators.

Over time the President has been criticized  by NRM supporters for running to give out money to groups in the opposition stronghold zones such as Kampala city and Wakiso district.

During the Youth Skilling Initiative, Museveni revealed they have rolled out a plan to start sending money to each district where each of the 16 categories will have  a fund of it s own and among the categories include Salon operators, Carpenters, market vendors, artisan, musicians, cottage operators, food vendors, mills that process foodstuff and so many others.

“From today, we are going to send money to each district. Each district will have a fund for salon operators, carpenters. Each of the 16 categories will have a fund of its own,” President Museveni said yesterday at Kololo Independence Grounds, where he passed out 7,000 youth who had undergone a six-month skilling training.

Groups in Kampala started receiving the Presidential initiative funds and each division received over shs. 500m to cater for the 16 groups which included taxi operators and youth from Kamwokya .

President Museveni walked into the ghettos with money hoping to counteract People Power since it is where Bobi wine derives his  power, However critiques say even when the President funds association in Kamwokya he will likely lose that electoral zone to Bobi wine because there is no way a Ghetto son can be betrayed.

Funding groups in Kamwokya triggered a lot of  dismay among his supporters in rural districts saying that they will not vote for him come 2021 since he takes their votes for granted.

Ever since the emergence of Kyadondo East Legislator Robert Kyagulanyi Ssentamu and declaring intentions to challenge Museveni, the ruling party intensified their campaigns among the youth by splashing money left right and centre with hope that they can be blinded but unfortunately the People Power Movement continues growing stronger each day that passes.

The Presidential initiative funds if at all they reach the targeted People, the funds are expected to empower the people to start manufacturing products that the country has been importing.

As the Minister for Kampala continues promising Museveni that she will get him full support in Kampala , Betty Kamya revealed that skilling and funds given to the youth are part of their efforts to strengthen President Museveni’s electoral base in urban areas and keep him in power beyond 2021.

“I prophesied that President Museveni will get 85 per cent in Kampala in the next election. People laughed at me, but this is one of the signs that the President is on ground. ….Mzee, you have stamina,” Ms Kamya said