Museveni writes long letter on insecurity in the country-Part 1 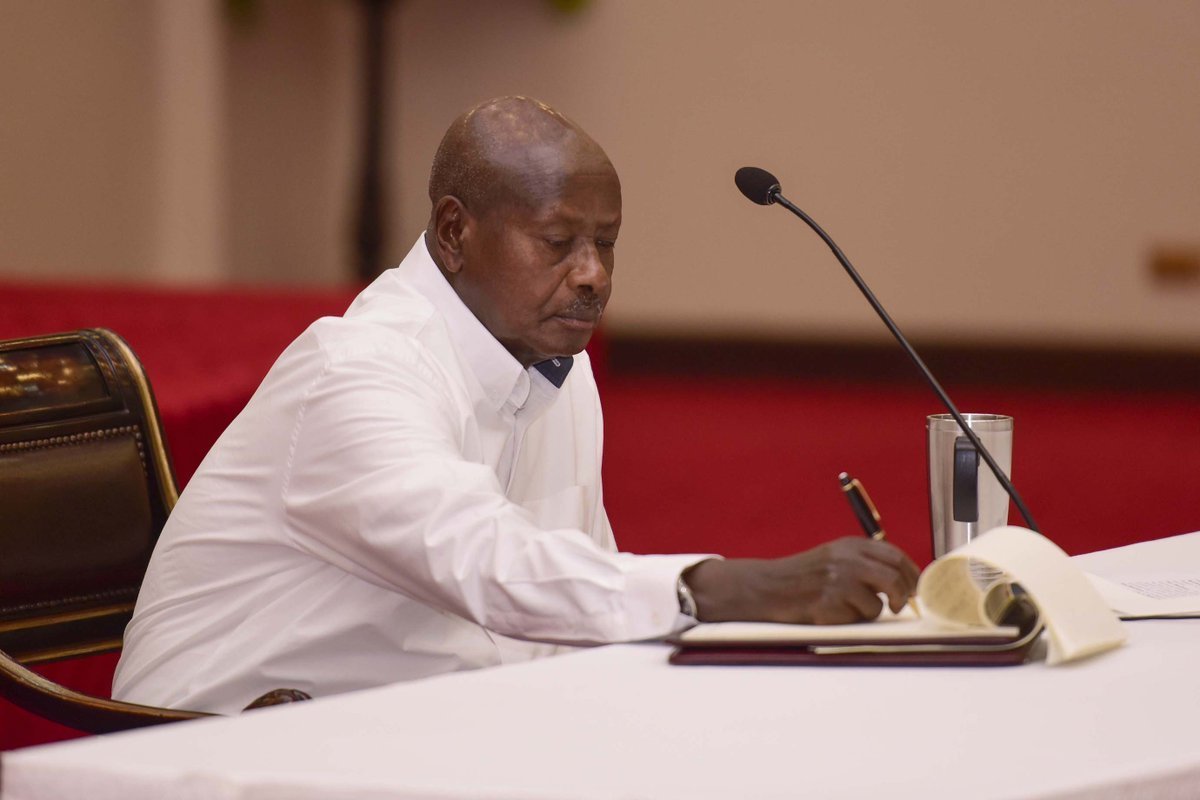 Fellow Ugandans and, especially the Bazukulu.
First of all, Condolences on the killing of the young Bazukulu Nagirinya and Kitayimbwa by the criminals as the two were at the gate of the former’s residence at 23:49 hours on the night of August 28th, 2019.

Also condolences on the murder of Joshua Rushegyera and Tumukunde Merina on the night of 5th of September, 2019 between 22:28 and 23 hours on the Entebbe Expressway. Joshua Rushegyera was my nephew, being a son of my cousin Kyohairwe, who was married to an NRM supporter in Bushenyi by the names of Rushegyera. There have been other killings reported in the Lyantonde area.

As I told you before, these criminals are pigs. Anybody who kills people outside war is a pig. Moreover, many are stupid. They forget that all crime leaves clues and, eventually, the criminals will be captured. Up to the killing of Kaweesi, Kiggundu, and Abiriga, the security infrastructure had lagged behind. You remember after those killings, I presented to Parliament a 10 points anti-crime plan on the 20th of June 2018. Although we have only partially implemented it, many of the killers in recent times have been arrested. The Masaka gang of Kiddawalime was wiped out (killed or arrested), Serugo Paul and his Syndicate in Masaka, Kanyesigye Juilius alias Mwesigye Amon in Rwizi and Kampala and the Usafi mosque criminal syndicate were neutralized.

With the modest investments we have made in the anti-crime infrastructure, the criminals are in trouble. Why? They are leaving behind many clues that were not the case before. Secondly, they are helping us to expose the weaknesses of the Police or their allies in the Police. Take the case of Nagirinya. When she was kidnapped, the relatives, immediately, informed the Police of Kibumbiro Police post at Nateete, by about 00:43 hours. The officer there should have informed all the Police units and patrol cars and the camera centres about the type of car that had been hi-jacked.

The cameras then would track that vehicle and those criminals would have been arrested or killed before they abandoned the car at Nateete, after dumping the bodies of the victims in Mukono. The officer at Kibumbiro Police post- Busega says that she tried to contact the 999 but the 999 was not picking until 00:50 hours. What is this- criminal negligence or collusion? Whatever it was, we are slowly moving forward. On account of the cameras and other technical means, we are now able to know who did not do his work. The Policemen in the camera centres were asleep, only waking up to “retrieve” pictures from the memory of the cameras. Rubbish. You are not only supposed to retrieve pictures that happened some hours ago. You are supposed to watch live and tell the patrol vehicles to act promptly. All these have been arrested. I have directed that all involved must be tried, sentenced, punished and dismissed from the Police. Moreover, they should never work in any Govt department ever, again.

There are many Bazzukulu who are looking for jobs and if those who are in uniform today cannot do their job, there are plenty who will replace them. This is all before we introduce the other measures, such as the digital (electronic) registration of all vehicles and motorcycles so that we electronically track every vehicle. It will tighten the rope around the neck of criminals. Even in the case of Rushegyera and Tumukunde Merina, there are signs of negligence by the Police. I am awaiting details. Criminals always leave clues. With better technology, like what we are acquiring, identification becomes easy. In the USA, as you normally hear, there are mass shootings every other week. However, identification is always fast. That is where we are heading.

You may commit a crime, carelessly taking away the lives of others; however, you will also lose your own life. We need to make this clear to the Courts. It must be an eye for eye. Nothing less will be acceptable to the freedom fighters that I represent and the entirety of the electorate of Uganda that I represent.

We bring you part two of this long letter in the next segment.