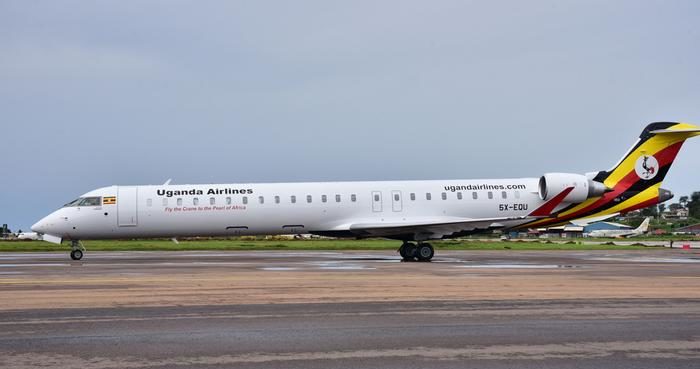 The newly revived Uganda Airlines, has  come out too dismiss claims about the newly purchased jets being grounded as fake news.

Since the start of this week, there has been  what the Uganda Airlines administration calls malicious and false claims that the two Bombardier CRJ900 jets belongiong to Uganda Airlines were grounded and not operating over serious mechanical issues.

In a statement issued by the Airlines administration, they noted that information about grounding of the bombardiers is false and malicious.

In accordance with the systems and regulations of the Uganda Civil Aviation Authority [CAA], the Two CRJ900 Uganda Airline bombardiers  were undergoing  routine maintenance .

“Routine maintenance is mandatory and will be upheld as required to ensure maximum safety of our passengers and seamless operations of all our Aircraft.”

Uganda Airlines would like to assure all its customers, stakeholders and the general public that the Airline operations are happening as per earlier communicated schedule.

They further revealed that as promised Uganda Airlines is working on  more direct flights and convenient timings and will ensure On-time departures for it’s esteemed passengers and clients.

Uganda Airlines successfully completed its maiden flight from Entebbe to Nairobi on 7th September 2019 raising optimism over the future of the country’s aviation industry. The inaugural flight underlined the start of a new chapter in Uganda’s commercial aviation, with President Yoweri Museveni describing the commissioning as a “historic moment” for all Ugandans after having halted the Airlines operations for 19 years .