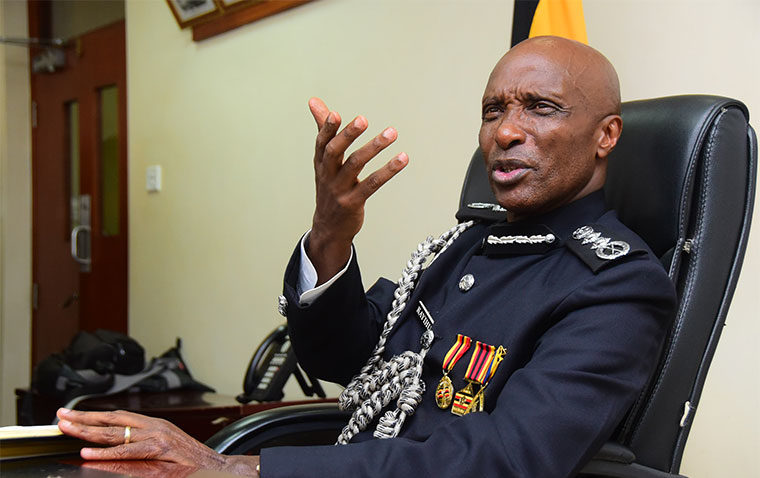 Former Inspector General of Police Gen. Kale Kayihura, who was yesterday sanctioned by United States on allegations of corruption and human rights abuse, has slammed back  at the US sanctions saying that all cases accused against him are baseless because they were investigated with the help of FBI during his tenure in office adding that the allegations are intended to tarnish his image and defame him.

Below is Kayihura’s full statement;

I have been informed about the statement of the United States Department of the Treasury issued on the 13th of September 2019.

In the baseless, unverified and outrageous statement, I am accused that while I was working as Inspector General of Police (IGP) in Uganda, I engaged in Human Rights violations, corruption, and smuggling drugs, gold and wildlife.

This is not only absolutely false but outrageous and infuriating, especially that these accusations and decisions have been made without according me an opportunity to respond to them, whereby I would give evidence to the contrary. The United States Government was known as a government that believed in due process, rule of law and democracy. There was absolutely no due process accorded to me before false wild and defamatory statements about my person and my record were issued from Washington, without any bother to verify such allegations, which are in actual fact against the state of Uganda for which I was working.

To set the record straight, I am an upright citizen of Uganda, who whether in my public or private capacity is pro-people and I have never been corrupt as alleged, or at all.

I do not own and have never owed any property in the United States, or anywhere else outside Uganda. I do not have any bank accounts outside my country, Uganda. The insinuations in the statement that I could own any property outside Uganda are totally fabricated and malicious. The freezing of my so-called assets therefore, is comical.

I reject completely the characterization of the Uganda Police Force as some criminal outfit that I led. Under my tenure, we grew the force to almost 40,000 people and introduced a number of departments to serve the public better.

The statement from the Treasury is not just factually inaccurate. It is not just procedurally improper but an absolute travesty of justice, it is also extremely hypocritical. The fact is that the FBI worked closely with me and with units of police that were involved in fighting crime, including the Flying Squad. They were not scandalised by my leadership but actually gave me an award for my contribution in the fight against terror. There is no high profile case in which our units did not liaise with the FBI. They participated in, for example, the investigations into the assassinations of the late Joan Kagezi and the late Andrew Felix Kaweesi, as well as the 2010 terror case. The Treasury would thus do well to sanction those officers also.

The FBI officers were not spared the false allegations I had become accustomed to. In fact, in the East African Court of Justice in the High Court of Uganda, and in a court in London, allegations were made about torture of the 2010 terrorist suspects, where the FBI was specifically mentioned, and FBI officers testified.

To have people who should have a better context of the challenges we faced and of the effort we undertook in the fight against terror, issue such nonsensical statements, is truly the height of hypocrisy. The Treasure Secretary would be well advised to conduct some research before speaking out against individual persons. For the record, investigations into the murders of the late Joan Kagezi and Andrew Felix Kaweesi were also conducted with help from the FBI. In the case of the latter, the FBI were at the scene of the crime to help us reconstruct it. The FBI also worked with Flying Squad. Thus, instead of searching for my non-existent US properties, the Treasury should instead be helping in the fight against global terror.

The allegations of Human Rights abuses in relation to Nalufenya, purportedly committed under my watch are false and without foundation. There is no person who was tortured under my instruction or with my knowledge in a police facility in Uganda. In fact, a number of Governmental and Non-Governmental institutions, in particular the Parliamentary Committee on Human Rights and the Uganda Human Rights Commission, visited Nalufenya from time to time. They fully interacted with the detained suspects, and received first-hand information that there were no complaints of their conditions while in detention. Indeed, in their report, the Parliamentary Committee on Human Rights stated that there was no torture of suspects taking place in Nalufenya.

As a matter of fact, it is important to point out that during my watch and tenure, I institutionalised in the Uganda Police Force, the observance of Human Rights and the fight against corruption by establishing such departments as the Professional Standards Unit and the Directorate of Human Rights and Legal Services. Whenever any complaints were brought to my attention, I caused investigations of the same, and those culpable were handled through the due process of law either in civil courts or the Police Disciplinary Courts. A case in point is the Mayor who was tortured before he reached Nalufenya, and those officers were arrested, charged and prosecuted.

I find the allegations that I engaged in illegal transactions, such as the smuggling of drugs, gold and wildlife outrageous and insulting. This would be laughable if it were not such a grievous malignment of my character. Those who know me find these accusations absurd and extremely frustrating, to say the least. It is all the more scandalous since the American authorities cannot even specify the allegations and give me an opportunity to respond. The due process of law is disappearing in Washington and standards have slipped, but has it become so cavalier in its disregard for due process?

Let me also clarify on the role of the Flying Squad within the Uganda Police Force. I inherited some of these units of the force, where prior the department was called the Violent Crimes Crack Unit, then the Rapid Response Unit, and finally Flying Squad. This unit was to comprise a group of police officers who respond rapidly to criminal and violent incidents. These officers helped in resolving cases such as preventing murders, recovering illegal firearms and more. Units like these are created to respond to the changing nature of the criminal underworld. Any indiscipline in the force would be handled without stopping the evolution of the police into a force that can carry out its constitutional mandate of preventing and detecting crime. These units simply supplement the work of the territorial police, and even the United States Police contain such units. Criminalising them would only help crime thrive. The Uganda Police, and myself as its former head, did everything we could to fight crime, including receiving help from the FBI, setting up units like Flying Squad, expanding the force, and equipping its directorates.

That is why during my tenure, we worked greatly to expand Fire Brigade and Traffic, a Legal Unit as aforementioned, building the K9 Unit, on Forensics, creating a Pathology Department, Community Police, and Rapid Response. I therefore reject completely the characterisation of myself and the Uganda Police under me, put forward by this statement from the United States. Such a statement would be the equivalent of painting American security departments with the broad brush strokes of the controversies surrounding the Abu Ghraib prison, notorious for torture, Guantanamo Bay, and the police shootings of ethnic minorities.

By and large, the almost 40,000 police officers I left behind work as public servants for the betterment of Uganda, our sovereign country, and during my time the police were brought closer to the people. I too always acted in good faith for God and my country.

The idea that I used corruption to entrench my political position is completely nonsensical. The IGP in Uganda is appointed by the President with the approval of Parliament. There is no space for me to campaign and use corruption to keep my office. Any assertions of the sort are the result of poor research by American authorities. It is only in the United States where Police leaders are elected and can hence entrench their positions politically.

It is truly surprising that the US Government would pass judgement, make decisions and take actions on me based on deceitful propaganda, rather than facts and the truth. These allegations fit the now discredited narrative, which has been perpetrated by intriguers in Uganda since I left the Uganda Police Force. Their objective was to falsely criminalize me and accuse me of all sorts of crimes in order to malign me and destroy my public persona.

Regarding the sanctions on myself, my wife, and my children , I find them unfortunate because it is legally, morally, and factually baseless. In any case, neither I nor my family had any plans to travel to the United States, and therefore do not have any need to apply for visas to go there. There was no need to bring my family into a statement based on falsehoods and fabrications.

I find it hypocritical that the United States Government authorities could claim to uphold Human Rights yet in their letter and action; they fall below the lowest standards of the due process of law. How can they accuse, judge and condemn a person without the basic decency to respect the principles of natural justice, specifically, affording a person the opportunity and the right to be heard?

To family, friends and well-wishers in Uganda and abroad, I wish to assure you of my innocence. This is only the latest part of an ordeal we have had to endure since I left public office in March 2018. It is particularly curious that this statement has come now, at a time when the truth about my innocence in relation to the multiple allegations against me were coming to light. And at the same time, when the conspiratorial plots to criminally frame me were finally being exposed to the country and the world, most recently in the Parliament of Uganda.

Lastly, I view the false allegations and the ridiculous action as an attack on the sovereignty of Uganda, as I and the Uganda Police Force are targeted in an official capacity. To sit in Washington and make the spurious and unproven baseless allegations, and take action on them without any effort to establish any truth, against a former IGP and a National Police Force is the highest form of disrespect of a foreign country.

I remain resolute against this new wave of actions based on concoctions and lies.