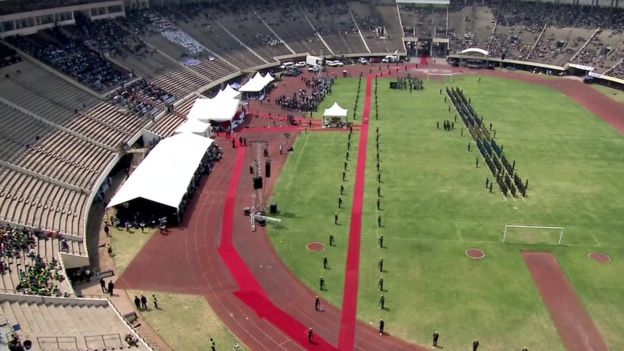 Zimeye|There were acres and acres of empty seats at the state funeral of former Zimbabwean president Robert Mugabe at the National Sports Stadium in Harare on Saturday.

Earlier this week, when Mugabe’s body arrived from Singapore, where he died in a medical facility last Friday, thousands of Zimbabweans lined the streets of Harare to welcome him home.

Speaking for the Mugabe family at the funeral on Saturday, Walter Chidhakwa, said: “When the remains of the former president arrived in the country, the crowds that gathered to welcome him were of unprecedented proportions.

“The crowds that lined the streets from Harare International Airport into the city have never been seen before in this country.

“I called it a genuine overflow of kindness,” he said. Former Zimbabwean President Robert Mugabe’s coffin arrives for a state funeral for at the National Sports Stadium in Harare.

Yet on Saturday, the crowd only filled about 30% of the stadium’s 60,000 capacity, with many of those in attendance wearing ZANU-PF party regalia.

This despite scores of buses being availed to transport people into the stadium.

In downtown Harare, many Zimbabweans were busy with their weekend errands and expressed little interest in the funeral, which was open to the public.

“What will I get if I go there? What will Mugabe do for me now that he failed to do when he was alive?” said Amelia Tukande, who was selling cellphone chargers along Harare’s Samora Machel Avenue that leads to the stadium. “It is a waste of time. I have to work for my family.”

Others said they would have wanted to attend the funeral but cannot afford transport fares.

“I didn’t like him, but I still wanted to attend just to see for myself that he is gone … but kombis (minivan taxis) want $3.50 just to get to the stadium,” said Amos Siduna, waiting in line at a bank to get cash, which is in short supply. “That’s too much money for me just to go and say ‘bye bye’ to a corpse. Mugabe’s corpse. No.”

Several leaders who spoke at the service on Saturday described Mugabe as a visionary, a leader who out Africans first, a teacher and an educationist.

Ramaphosa was booed in the wake of attacks on foreigners in Gauteng in recent weeks, but he rose above the jeers and apologised to Zimbabweans, and Africans by extension, leading to a chorus of cheers reverberating around the stadium.

Kenyan President Uhuru Kenyatta described Mugabe as “a great icon of African liberation” and “a visionary leader and relentless champion of African dignity.”

The service and viewing of the body of Mugabe, who died last week in Singapore at age 95, comes following the announcement by the Mugabe family and that his burial will be postponed until a new resting place for his body can be constructed at the National Heroes’ Acre monument.