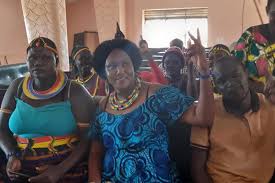 The Forum for Democratic Change has come out to reject their candidate’s withdrawal from the Kaabong Woman MP race. FDC’s Adyaka Judith Nalibe last week wrote to the Electoral Commission, notifying it of her decision to withdraw from the race.

FDC’s Secretary-General has written to the EC, notifying it of the party’s objection to the withdrawal. Nandala Mafabi says that Nalibe was sponsored by FDC and under the multiparty dispensation, the EC and the candidate have no such powers to withdraw from the race. He said that only the party can do that. Mafabi also said, that should the EC go-ahead to enforce this decision, they should be ready to compensate FDC up to 200 million shillings in costs.

Nalibe penned a letter to the electoral commission on 9th September, in which she informed the commission of her exit from the race.  She accused the FDC party of neglecting her during the campaigns and making empty promises to her. However, reports indicate that the NRM bribed her with hundreds of millions in cash and also promised her a juicy job.

If Nalibe’s withdrawal is enforced, it would mean that the NRM candidate Ms Christine Tubo Nakwang wins the election unopposed.