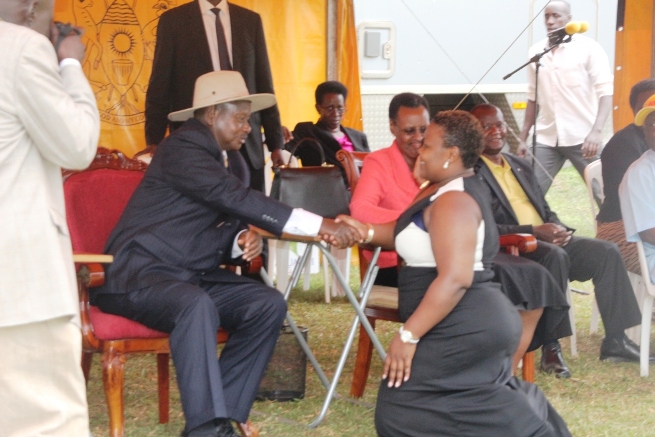 It seems like the NRM Chairman and president, Yoweri Museveni has learnt his lesson after throwing musician and fan, DJ Michael to the dogs. DJ Michael recently denounced the NRM for not providing him with support as he struggled with his flopped concert last month.

The president, Yoweri Kaguta Museveni, it now seems is ready to stand by his trusted yellow artistes through thick and thin. The latest information reaching our desk indicates that the President will grace Catherine Kusasira’s album launch as the chief guest.

Catherine Kusasira announced her concert dubbed “Tears of a woman” that is scheduled to take at Serena Hotel Kampala on Friday, September 20. Kusasira, a staunch NRM supporter, has of late been known to carry condolences from the president to bereaved families. Her music path had stagnated after supporters rejected her works over her association with NRM.

According to Ms Kusasira, she has revealed that the president confirmed his presence and will attend the concert to support her and see what other musicians have in store. “Am a performer and a singer who has been doing this for a long time and call upon all of you to come and attend my show that will be filled with energy expect the best I assure you. You  know me as fulfiller as in the past as I work  towards my legacy.” She added.

The president recently attended singer Bebe Cool’s “Golden Heart” concert in Kololo. Since then, Bebe Cool’s music fortunes took a dip as he has been booed and bottles were thrown at him as he performed on subsequent shows.