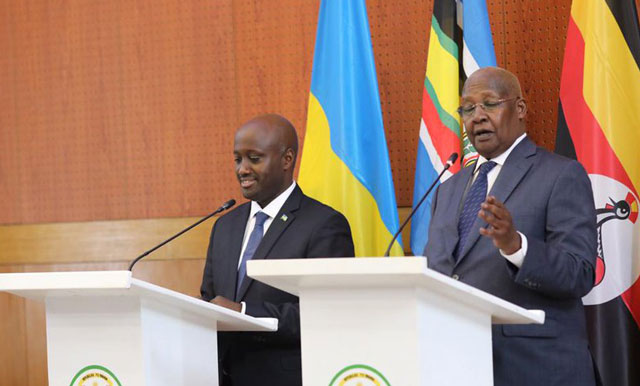 Uganda and Rwanda have concluded the first meeting on the Luanda pact with an agreement to cease hostilities and also release political prisoners. The agreement is contained in a communique that the two countries released at the end of their first meeting held in Kigali, Rwanda, today.

The talks follow a pact signed by Ugandan President Yoweri Museveni and Paul Kagame of Rwanda last month in Luanda, Angola, to ease the tensions between the two countries. They agreed on a second meeting in Kampala, Uganda, next month. 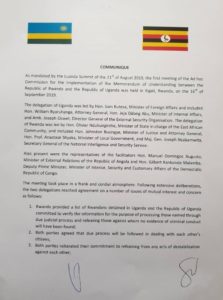 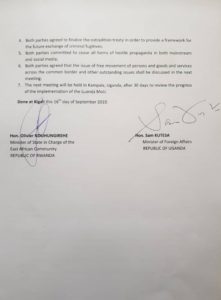 Regarding the challenges, both countries have agreed to work on each of the concerns in the next 30 days, after which the Ad Hoc Commission will meet in Kampala to review the progress made. Rwanda provided a list of people they say are detained in Uganda. Uganda committed to check against the names and release all those that will have no charges to answer, while those with criminal cases to answer will be formally charged. Further, they agreed to finalize the extradition treaty in order to provide a framework for the future exchange of criminal fugitives.

The talks are expected to also lead to the opening of the Katuna border which has been closed since February, jeopardizing trade flow between the two nations. In a media briefing as a communique was shared with the press, Foreign Affairs Minister Sam Kutesa insisted Uganda does not support or harbour groups that want to destabilize Rwanda. He said Uganda would have no interest in destabilizing Rwanda.