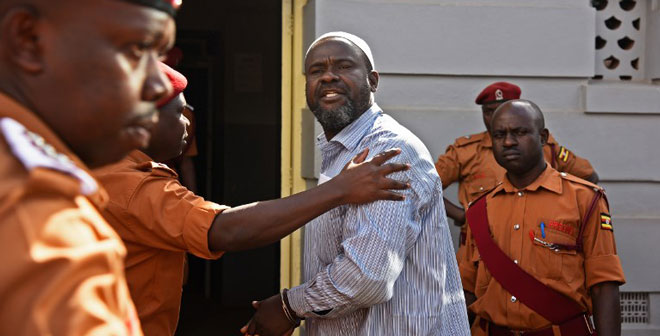 Today, Justice Eva Luswata confirmed counts of Terrorism, Murder, aggravated robbery, attempted murder and belonging to ADF, a terrorism group –ADF after ruling that there was sufficient evidence to warrant a trial of the 38 people led by Mukulu.

They have been committed for trial before a panel of three justices of the International Crimes Division of the High Court before whom they will plead to the charges.

However, justice Luswata clarified that at this stage, she cannot go ahead to conclude whether Mukulu and his co-accused are guilty of the offenses because this can only be done after a full trial has been conducted.

The 38 accused people were returned to Luzira awaiting a date for the trial to begin but Mukulu said he is going to appeal against the ruling.

According to evidence provided by the Director of Public Prosecutions against the group, Jamilu Mukulu is presented as the leader of Allied Democratic Forces and Salaf Muslim community in Uganda who would give orders to his 37 co-suspects to carry out raids and commit murders to other Muslim communities with whom they had disagreements in ideologies on which direction to face while carrying out prayers.

Among the prominent murders, Mukulu and his group are accused of carrying out is that of two sheikhs including Daktur Muwaya and Yunus Abubakar Mandanga in Mayuge and Bugiri districts respectively and the murder of 2 police officers Muzamir Babale and Karim Tenywa from Bugiri police station.

The group is also said to have robbed guns, ammunition, a gold weighing machine, millions of money and attempting to take away the lives of many people.

The prosecution also contends that Mukulu his group committed these offences in various districts including Kampala, Wakiso, Mayuge , Budaka and Mbale among others and that the indiscriminate attacks instilled fear in the public to influence it for either social, political, economic or religious aims.

The prosecution intends to rely on several exhibits including explosives, literature related to activities of ADF, car number plates, confession statements of some of the suspects which will be availed during the trial.

Mukulu was arrested in 2015 in Tanzania before being extradited back to Uganda.