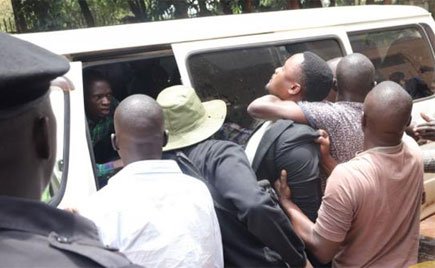 Lawyers and relatives of re-arrested former AIGP Andrew Kaweesi murder suspects, have petitioned the Civil Division of the High court in Kampala, seeking orders compelling the security organs to produce them in court. The lawyers filed a Habeas Corpus application after failing to trace the suspects from all designated security centres.

The respondents in the suit are the Attorney General, the Inspector General of Police and Elly Womanya the Commandant SIU-Kireka. The lawyers are seeking for orders to produce the bodies of Mugerwa Yusuf, Kalyango Jibril and Nyanzi Yusuf dead or alive.

Anthony Wameli of Wameli & Company Advocates and Geoffrey Turyamusiima, who filed the application contend that their clients were illegally arrested by agents acting under the authority of the state, and their continued illegal detention in ungazetted places is an infringement on their rights to personal liberty.

They argue that last week on Wednesday (September 11, 2019) the 4 men together with others appeared before the International Crimes Division Court Registrar Esther Nasambu for signing of their release order, having been granted bail in March this year by Justice Lydia Mugambe.

The lawyers contend that it is now beyond 48 hours and their clients have not been produced before any court of law nor formally charged with any offence known under the law. The lawyers state that they verily believe that their clients where illegally arrested and are being illegally detained by the respondents their agents, servants and or persons acting under them.