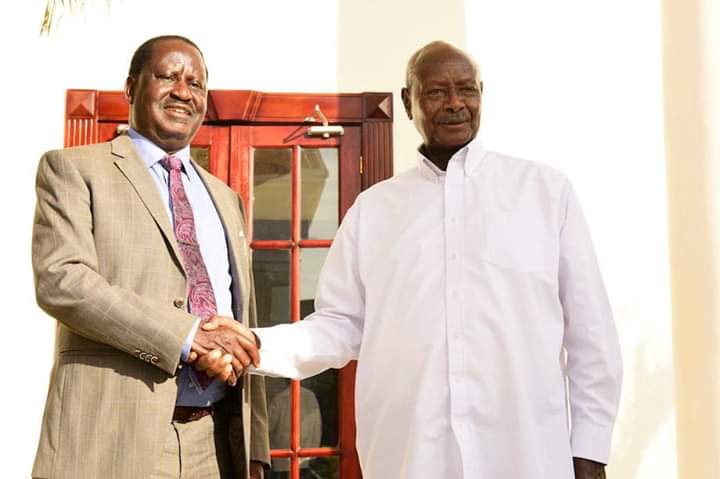 The motive of the meeting is unclear but sources privy to state house say the duo were brokering a deal that can help them pattern their political puzzle. Odinga is likely to contest for presidency in the coming Kenya general elections. He has been a perennial loser having vied for over two decades. Today’s meeting comes just days after Mr Museveni met with the incumbent Kenyan leader, Uhuru Kenyatta.

The two met in Karamoja region and signed a pact that remains undisclosed to the public. Museveni and Odinga have had a contested relationship where the latter had been intruding into Uganda’s election. In the 2016 elections, Raila Odinga was seen moving with the FDC presidential candidate Rtd.col.Dr. Kizza Besigye. Odinga’s association with Uganda’s opposition at one point almost choked down the figure and fetish of Mr Museveni.

The closed  door meeting has just been announced on the State House Uganda official Facebook page which reads, ‘President Yoweri Kaguta Museveni has received and held a meeting with former Kenya Prime Minister, Mr Raila Odinga, who paid a courtesy call on him this afternoon at State House, Entebbe.
Mr Museveni and his visitor discussed matters related to socio-economic as well as political developments in their respective countries.’