Mbale man who nailed himself denied by NRM leaders 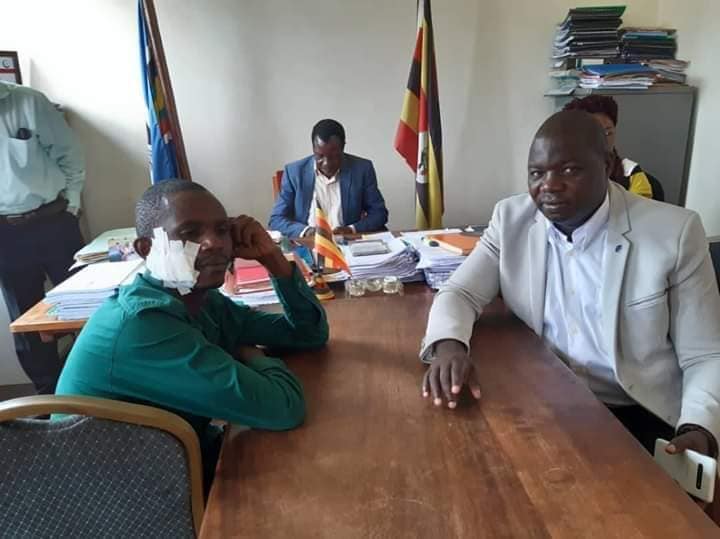 When Bobi Wine sang his “Kiwaani” song, he must have had in mind men like Isaac Kitoogo of Mbale who nailed his cheek with a 3-inch nail in order to attract the sympathies of the NRM government.

Well, leaders of the ruling National Resistance Movement (NRM) party in Mbale District have disowned a 37 –year-old man, who was allegedly attacked by unidentified people because he supports the party.

Mr Isaac Kitoogo, a resident of Nambozo Cell, Nkoma Ward in Mbale Municipality, was reportedly beaten and a 3-inch nail driven through his right cheek on Monday night.

He was admitted to Mbale General Clinic. On Tuesday evening, he was discharged.
However, during a press conference at the Office of Resident District Commissioner (RDC) in Mbale Town, the district party chairman, Mr Mahamood Masaba said that the victim is not a supporter of the party.

“After verification, we have confirmed that he is not our supporter. Therefore, in our district, we do not have any supporter or leader of NRM party, who was beaten,” Mr Masaba said.

He said the victim is not a resident of Mbale District.
The Resident District Commissioner (RDC), Mbale Mr Sulaimani Barassa Ogajjo, said that the victim fabricated the incident in order to attract President Museveni’s attention.

“I believe it was a fake deal. He wanted to get money from the government after claiming he was attacked,” Mr Barassa.
He said the masquerader would be taken to Chief of Military Intelligence for further investigations.
Mr Barasa said a police surgeon, Dr Rubanza examined the victims and found a minor scar on his cheek.