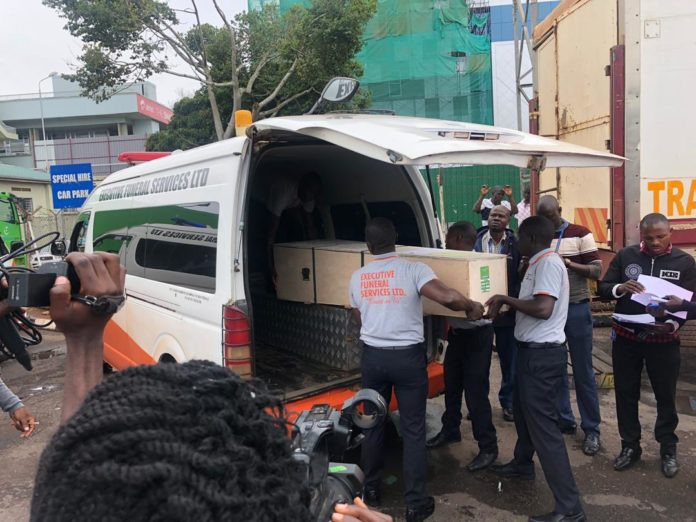 Minister for Gender, Labour and Social Development Hajjat Janat Mukwaya was yesterday tasked to explain why Ugandans continue dying in the Arab world under unknown circumstances and the Government has not come out with any solutions yet.

Legislators who attended the Tuesday Parliamentary sitting reported that out of the six bodies that were returned last week from Oman and other countries, most of them had missing body organs.

The Bitter Legislators put Minister Mukwaya to explain circumstances under which these six Ugandan lost their lives.

The Iganga Municipality Legislator Peter Mugema Panadol noted that he had received with grief the body of one of the girls in his Municipality with body parts missing and according to him some of the companies that take these girls to work must be dealing in Human organs.

He further tasked the Minister to order Shukran Habib recruitment  Company to produce a detailed account of what the People recruited do in those Arab countries adding that there is a possibility that Ugandans are trafficked and sold on the organ market in the disguise of employment.

Medical Documents were tabled before Parliament indicating how some bodies were returned with missing body organs and parts citing that one of the deceased from his municipality identified as Joy Kisakye was returned with a missing breast and many other parts.

“but on the examination of the dead body when we received it from Entebbe, it had burns all over it. The head had been shuttered, one of the breasts had been taken, even what women normally possess a lot, it had been removed. they had even opened I think the whole of the human being and I think some of the parts had been taken,” panadol stated.

However, when minister Mukwaya rose up to explain the circumstances under which some Ugandans lost their lives while abroad she was intercepted by the angry legislators after she mentioned that even in Uganda when carrying out a post-mortem test, the body is opened up before Angry Legislators intercepted her saying that she is covering up for something that needs to be worked on as soon as possible.

In their view, there’s something fishy taking place against Ugandans working in the Arab World because Ugandans cannot just keep dying like that, there must be a bigger problem that needs immediate attention.