Erias Lukwago and Beti Kamya in yet another feud. 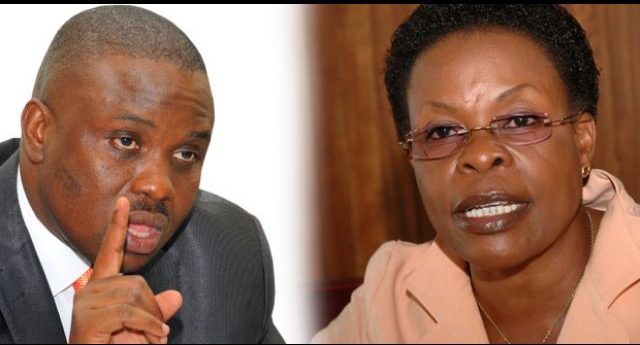 Kampala Lord Mayor Elias Lukwago and Kampala Minister, Beti Kamya, are in yet another feud. The two are fighting over the implementation of council resolutions. This has had Lukwago accusing the minister for allegedly making his work difficult.

The latest feud arises from a letter that the minister wrote to the lord mayor.  In the letter, Kamya cautions Lukwago on “irregularity where the Authority is implementing Council resolutions without following the appropriate procedures laid out in the law of first confirming and signing of minutes of the meeting”.

Kamya pointed out that when the KCCA council resolved to summon the former KCCA executive director, Jenifer Musisi and Director Legal Affairs, Charles Ouma over exorbitant legal fees they went ahead to implement the resolution before the minutes were signed.

The KCCA Act requires that all the minutes of the council be signed by the executive director, and the lord mayor in the presence of city lord Councillors then forwarded to the minister of Kampala for the final signature.

Lukwago had summoned the former executive director of KCCA, Jennifer Musisi and the former director legal affairs Charles Ouma to appear before the council on 26th September to explain the huge debt of over 47 billion left behind before their resignation. However, the minister says Lukwago has no powers to summon the duo before the minutes of the last seating are signed.

Lukwago argues that this is aimed at making his work difficult because these are matters of urgency which require immediate action. The Ag. KCCA Deputy Executive Director, Sam Sserunkuma has sided with Lukwago, noting that Kamya needs to seek further legal guidance. He advised that the KCCA council goes ahead with its upcoming meetings but postpones the summons until minutes are signed.

This impasse has paralysed the implementation of the resolutions, with some councillors siding with the Lord Mayor while others have taken the side of the minister.